Splenic vein thrombosis and splenic infarction are complications beyond the usual clinical spectrum of paratyphoid fever, and the presentation is rarely described. We report the case of a young female, who presented with high‐grade fever and severe left upper quadrant pain. Her blood culture was positive for Salmonella paratyphi A, with Widal test suggesting 4‐fold rise in titers. Computed tomography revealed splenic vein thrombosis and multiple splenic infarcts, for which antibiotic and anticoagulation were instituted simultaneously. She had a complete resolution with this management, and anticoagulation was tapered off on subsequent visits.

Splenic infarction is an infrequent cause of acute abdomen in the emergency room. It is commonly associated with hematological conditions such as leukemia and lymphoma; thromboembolic disorders such as infective endocarditis; and rarely with intra-abdominal infections.[1] In a study,[2] cardioembolic events were the leading cause of splenic infarcts in 89 subjects. Other less commonly known etiologies include autoimmune and vascular diseases such as polyarteritis nodosa; embolic events secondary to atrial fibrillation; sickle cell disease and trait; systemic infections; and trauma.[3] These disorders compromise the segmental vascular supply of the spleen, resulting in wedge-shaped infarcts. Enteric fever, especially due to Salmonella paratyphi, is an atypical cause of splenic infarction or thrombosis of the splenic vein. Literature has described this entity in the context of Salmonella typhi, but not in cases of Paratyphi and our case narrates this unique complication.

A 25-year-old female patient with no known comorbidities presented to the emergency room with high-grade fever, associated with chills and rigor of 5 days and left upper abdominal pain of 4-day duration. There was no associated history of vomiting or loose stools. On examination, she was conscious and oriented with an oral temperature of 38.8°C; regular pulse with rate of 114/min; and blood pressure of 110/70 mmHg. Abdominal examination revealed tender splenomegaly, measuring 2.5 cm below the left subcostal margin. Bowel sounds were present, and other systemic examination was normal.

Laboratory parameters revealed hemoglobin of 10.8 g/dl, platelet count of 2.83 × 109/L, and leukocyte count of 7.3 × 109/L. The peripheral blood film revealed normocytic normochromic red blood cells with no evidence of sickling. Serum electrolytes, renal and liver functions, coagulogram, amylase, and lipase levels were within normal range. Chest radiograph and electrocardiogram were unremarkable, but the erythrocyte sedimentation rate (65 mm in 1st h; normal 0–20 mm) and C-reactive protein (178 mg/dl; normal < 5) levels were raised. Her Widal test showed 1:80 titers of S. paratyphi on 2nd and 1:320 titers on the 10th day of the admission, but blood culture confirmed the diagnosis of S. paratyphi A, which was sensitive to ceftriaxone, piperacilline-tazobactam, imipenem, chloramphenicol, and ciprofloxacin. Urine culture was sterile, and her serology for other tropical illnesses, namely, dengue, malaria, scrub typhus, brucella, and leptospirosis were negative.

On further evaluation, abdominal ultrasonography (USG) of the patient revealed splenomegaly with ill-defined hypoechoic lesions in the splenic parenchyma [Figure 1]. It was followed by contrast-enhanced computed tomography (CECT) of the abdomen, which showed splenomegaly of 15.3 cm and multiple nonenhancing wedge-like confluent areas of infarct [Figure 2], along with splenic vein thrombosis [Figure 3]. There was no evidence of pancreatitis or any solid organ malignancy. Echocardiography suggested normal cardiac function with no evidence of infective endocarditis, and her bone marrow examination did not reveal any clonal proliferation of marrow elements. The antinuclear, anticardiolipin antibodies, and angiotensin-converting enzyme levels were within normal range, and serologies for HIV and hepatitis B and C virus were negative. Computed tomography (CT) angiography of abdominal/mesenteric vessels was also unremarkable, which ruled out the possibility of intra-abdominal vasculitis. 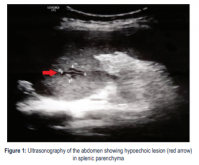 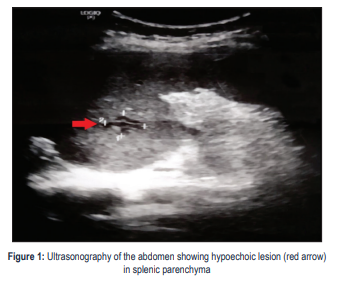 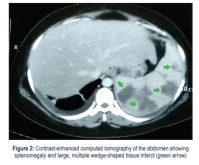 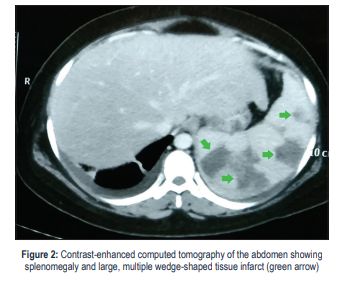 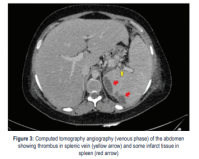 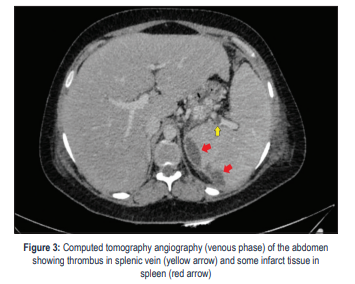 The patient was managed on the basis of the blood culture sensitivity report and started on injection ceftriaxone 2 g twice a day, along with intravenous fluid and analgesics. In view of splenic vein thrombosis, she was given fondaparinux 7.5 mg subcutaneously twice a day, which was overlapped with warfarin 3 mg once a day. The patient responded well to the treatment as her fever and abdominal pain subsided on 2nd day of the management. Antibiotics were continued for a total of 2 weeks, and she was discharged subsequently. Her anticoagulation medication was terminated in the next 3 months and follow-up USG of the abdomen revealed a normal splenic echotexture and size.

A written patient consent is present, obtained from the patient at the time of the discharge. The patient was explained that her identity will not be revealed, and the case information will be used for education purpose only.

Paratyphoid fever is a subtype of enteric fever, caused by Salmonella enterica serovar Paratyphi (A, B, and C). It chiefly infects the gastrointestinal tract and is a major public health problem affecting millions of individuals worldwide. Unusual complications can affect any organ systems and include acalculous cholecystitis in hepatobiliary system, Guillain–Barre' syndrome,[4] and acute transverse myelitis[5] in nervous system, sick sinus syndrome[6] in cardiovascular system, pyonephrosis, and glomerulonephritis[7] in renal system and rhabdomyolysis[8] in musculoskeletal system. Vascular complication such as thrombosis and splenic infarction is rare in enteric fever and splenic vein thrombosis in S. paratyphi is infrequently described.

Tropical infections can rarely present or masquerade as splenic infarcts. Recently, splenic infarction has been described in infections such as malaria,[9] Epstein bar virus,[10] and cytomegalovirus.[11] The exact mechanism for splenic infarct in infectious diseases is still obscured but proposed presumptions include transient hypercoagulable state, vascular occlusion due to increased circulating immune complexes and cellular stacking, and imbalance between blood supply and demand of large hypercellular spleen.[12]

Splenic infarct may have varied presentations or can have delayed observation until complications such as rupture or hemorrhage, splenic abscess or pseudocyst formation, and pancreatic and gastric fistula[13] set off. For its identification, abdominal USG can be used, but it is less sensitive. Whereas CECT abdomen can precisely identify the low attenuation defects and is the current modality of choice for accurate diagnosis. Other novel modalities such as magnetic resonance imaging with gadolinium contrast, radio-labeled autologous leukocyte scan, and scintigraphy can be used but hardly more useful than CECT.[1] Similarly, infective etiologies should be identified as a potential cause for splenic vein thrombosis, where other causes have been ruled out. S. paratyphi can be diagnosed with traditional tools such as Widal test and blood culture. Recently, serological tests such as enzyme-linked immunosorbent assay, typhoid and paratyphoid test, rapid diagnostic tests (RDTs such as Typhidot and Tubex) for certain antigens and antibodies, and reverse passive hemagglutination assay[14] have also been used for diagnosis. Similarly, polymerase chain reaction for nucleic acid detection and surface plasmon resonance[14] tests are other emerging specific tools for infection identification.

Antibiotic therapy is the mainstay of salmonellosis and the duration depends on the presence of complications and extra-intestinal manifestations. Antibiotics such as third generation cephalosporin, fluoroquinolones, ampicillin, or co-trimoxazole may be sufficient for 3–7 days[1] but can be extended up to 14 days in case of invasive infections. S. typhi and Paratyphi strains are usually sensitive to third generation of cephalosporins but resistance is not uncommon. A study on enteric fever by Umair and Siddiqui[15] suggested that S. Paratyphi has less resistance pattern than S. typhi. The research also described that ceftriaxone and imipenem had lower chances of resistance, and the second one, respectively, is the most useful antibiotic in cases with resistant strains.

Complications such as splenic vein thrombosis and infarction require special attention, but antiplatelet drugs have no role in these situations. Anticoagulation therapy can be used in large, complicated thrombus, and nonresolving scenarios, but specific indications are still lacking, probably due to rarity of this complication. The usual duration of the anticoagulation treatment is 3–6 months in provoked thrombotic cases, but removal of the cause is a more crucial step in the management. Surgical management like splenectomy is the last resort and is typically reserved for cases such as splenic rupture. We managed our patient with both antibiotics and short anticoagulation therapy, which was successful in terms of symptom resolution and complete recovery of the splenic tissue, suggested by the follow-up scan of the spleen. This indicates that medical management with precise antibiotics and judicious use of anticoagulation can prevent splenectomy and related complications in these patients.

Splenic vein thrombosis and infarct as a complication of S. paratyphi infection are an undescribed entity. The most common presentation is left upper quadrant pain and tenderness, which can be easily missed. Laboratory findings are also not very specific, so imaging modalities, specifically CT scan, are used for the identification of this complication in suspected patients. Mainstay of the treatment is antibiotics, either quinolones or third-generation cephalosporins, along with supportive measures. Being a reversible pathology, one must be aware of this complication for timely identification and management.

A written patient consent is present, duly signed by the patient. The authors obtained the consent after explaining that no identity will be revealed and the case information including pictures will be used for education purpose only. She also explained that journal publication will not contain any material or picture, disclosing her identity. The patient gave positive consent for publication and authors certify that written patient consent is present, procured for publication. The authors certify that they have obtained all appropriate patient consent forms. In the form, the patient has given her consent for her images and other clinical information to be reported in the journal. The patient understands that name and initial will not be published and due efforts will be made to conceal identity, but anonymity cannot be guaranteed.