In this article, we discuss the successful treatment of acute respiratory distress syndrome (ARDS), a rare complication of opioid overdose, through high-flow nasal cannula oxygen therapy (HFNCOT). A 32-year-old male patient was referred to the emergency department with an ambulance due to a state of confusion following intravenous opioid intake. On arrival, the patient had an arterial blood pressure of 100/60 mmHg, pulse of 112 beats/min, respiratory rate of 8 breaths/min, and oxygen saturation (SpO2) of 75%. On neurologic examination, he had miotic and isochoric pupils, and Glasgow Coma Score was 12 (E: 3 M: 5 V: 4). Cardiac examination showed that the heart was rhythmic and tachycardic. Chest examination revealed bibasilar crackles and wheezing. Naloxone was administered to the patient, and oxygen treatment was applied through a mask. Then, HFNCOT was commenced to the patient in whom the PaO2/FiO2 ratio in the blood gas was calculated as 141 following antidote treatment and whose chest radiograph showed bilateral infiltrations. The patient was discharged from the emergency critical care unit on the 3rd day of his hospitalization because infiltrations in his chest radiograph regressed. HFNCOT can recover the patient's hypoxemia and help reduce the necessity of mechanical ventilation in patients with mild or moderate ARDS.

Acute respiratory distress syndrome (ARDS) is one of the most severe forms of respiratory failure, accompanied by widespread inflammation in lungs, hypoxemia, and decreased lung compliance. ARDS has quite a high mortality rate, and mechanical ventilation is still one of the primary means of its treatment.[1] According to Berlin classification, patients can be diagnosed with ARDS if they meet the criteria of symptoms occurring within the last week, presence of bilateral opacities that cannot be explained by pleural effusions, a respiratory failure that cannot be explained through heart failure, and PaO2/FiO2 ratio below 300 mm/Hg.[2] Mortality rates can reach up to 30%–40% in patients managed through lung-protective ventilatory strategy.[1] Supportive treatment still constitutes the cornerstone of management.[3] High-flow nasal cannula oxygen therapy (HFNCOT) is a novel technique of oxygen therapy that includes a moisturizer, an air–oxygen blender, a heated and humidified circuit, and nasal cannula and allows delivery of oxygen at a rate of up to 60 L/min. Positive end-expiratory pressure (PEEP) and FiO2 provided by it reduce the work of breathing and improve clinical findings of patients, especially those with hypoxemic respiratory failure.[4]

In this case report, we have discussed the successful treatment of ARDS with HFNCOT, which developed as a complication of an opioid overdose.

A 32-year-old male patient was referred to the emergency department with an ambulance due to the state of confusion after intravenous opioid intake. On arrival, the patient had an arterial blood pressure of 100/60 mmHg, pulse of 112 beats/min, respiratory rate of 8 breaths/min, and oxygen saturation (SpO2) of 75%. On neurologic examination, he had miotic and isochoric pupils, and Glasgow Coma Score (GCS) was 12 (E: 3 M: 5 V: 4). Cardiac examination showed that the heart was rhythmic and tachycardic. There were no additional sound and murmur. Chest examination revealed bibasilar crackles and wheezing. His bedside blood glucose level was measured as 289 mg/dL. Initial arterial blood gas values included a pH level of 7.35, the partial pressure of oxygen (PaO2) of 39.6 mmHg, the partial pressure of carbon dioxide (PaCO2) of 43.1 mmHg, HCO3 level of 22.4 mEq/L, and SpO2 of 64.7%. Intravenous naloxone was administered to the patient, and oxygen therapy was initiated with a nonrebreathing oxygen mask. After an initial intravenous dose of 1.2 mg naloxone, his level of consciousness improved, the GCS score was 15, respiratory rate was 20 breaths/min, and the pulse was 88 beats/min. In order to maintain the standard level of consciousness, the naloxone infusion was initiated to the patient. Following the treatment, his arterial blood gas results were as follows: 7.33 pH, 85 mmHg PaO2, 46.7 mmHg PaCO2, 23.2 mEq/L HCO3, and 90% SaO2. Blood gas values in the follow-up period, total blood count, and biochemical parameters of the patient are shown in [Table 1] and [Table 2]. 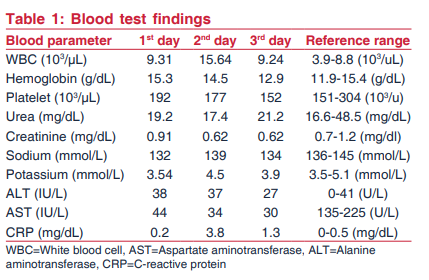 Posteroanterior chest radiograph of the patient revealed diffuse bilateral infiltrations [Figure 1]. The PaO2/FiO2 ratio was calculated as 141, while the patient had been receiving oxygen at a flow rate of 10 L/min (FiO2: 0.6) through an oxygen mask with a reservoir. There were no abnormal findings detected in transthoracic echocardiography, and the ejection fraction was measured as 60%. Brain natriuretic peptide level was found as 72 pg/mL. Based on these findings, opioid overdose-induced ARDS was considered in the patient, and HFNCOT treatment was initiated due to the lack of noninvasive mechanical ventilation (NIMV) devices. HFNCOT was administered to the patient with an inspiratory flow of 40 L/min (maximum flow rate of the device used), at a temperature of 37°C, and FiO2 of 100%. The flow rate and FiO2 parameters were adjusted according to the patient's clinical condition, arterial blood gas values, and following posteroanterior chest radiograph. Vapotherm®, Precision Flow® (Exeter, NH, USA) device was used for HFNCOT. The patient was treated with HFNCOT continuously for 24 h. Following the obtainment of appropriate cultures (sputum and blood), the patient had broad-spectrum antibiotic treatment until pneumonia was excluded. Infiltrations on the chest radiograph regressed on the 2nd day [Figure 2]. HFNCOT treatment was terminated after heart rate and breathing rate reached a normal range and hypoxemia disappeared in arterial blood gas samples. On the 3rd day of admission, the patient's vital signs were stable. Blood gases obtained within room air had no evidence of hypoxemia, and blood and sputum cultures showed no detection of bacteria after 48 h of incubation. The patient was discharged with recommendations. 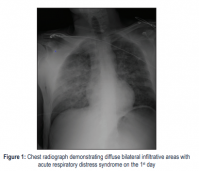 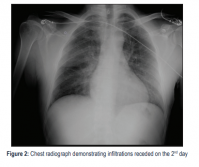 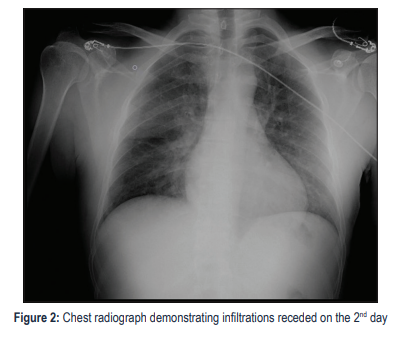 ARDS is an acute, diffuse injury of the lung due to inflammatory processes. In this severe lung condition, the intra-alveolar protein-rich liquid cannot be discharged and deposited due to the increase in capillary permeability caused by the damage to the capillary endothelium and alveolar epithelium. Increased free radical production, secreted cytokines (tumor necrosis factor and interleukin [IL]-1 and IL-6), and neutrophil activation contribute to diffuse alveolar damage.[5] ARDS, caused by heroin, methadone, and other opioid agents, is rarely seen.[6] Although the underlying mechanisms are not precisely understood, one theory suggests that capillary permeability increases secondary to hypoxemia, which causes the suppression of medullary respiratory centers, resulting in respiratory acidosis.[7] The second theory states that opioids cause an increase in capillary permeability by elevating local and systemic histamine secretion levels. Another theory is that increased catecholamine discharge created by naloxone in the treatment of opiate overdose causes a rapid decrease in PCO2 level. This decrease results in interstitial edema, and later fluid retention in the alveoli.[8] The severity of the resulting hypoxemia also determines the severity of ARDS. PaO2/FiO2 ratio is 200–300 mmHg in mild ARDS, 100–200 mmHg in moderate ARDS, and <100 mmHg in severe ARDS.[2] In our case, the patient had moderate ARDS with a PaO2/FiO2 ratio of 141.

The strategy to choose the treatment of ARDS is decided according to the level of hypoxemia, state of consciousness, and respiratory effort of the patient. Invasive mechanical ventilation (IMV), non-IMV(NIMV), or conventional oxygen therapy (COT) are possible treatment choices.[9] HFNCOT is a new noninvasive respiratory support method that can deliver 2–60 L/min flow through a moisturized and heated circuit. High-flow rates delivered by HFNCOT allow anatomical dead spaces of the upper airway to be washed and replace carbon dioxide in this area with oxygen, increase the lung volume following expiration, and reduce breathing workload and respiratory muscle fatigue.[10] Unlike COT, it can provide a PEEP effect (2–5 cmH2O), especially while the patient's mouth is closed. This additional PEEP reduces airway collapse and helps the opening of atelectatic areas (recruitment), therefore increasing functional units involved in gas exchange.[11],[x12]

HFNCOT might be an alternative of NIMV in eligible patients because it has several advantages. HFNCOT requires less intensive nursing care and can be used in the emergency department and general ward settings.[13] Besides, HFNCO treatment is better tolerated than NIMV due to the application with a nasal cannula instead of a face-covering mask. The treatment is less interrupted as it also allows simple daily life activities such as speaking and eating.[13],[14] However, some core differences should be considered. The constant flow rate of oxygen in the HFNCOT generates variable pressures in airways according to the patient's breath effort. In contrast, in NIMV, gas flow rate adapts to maintain a constant inspiratory PEEP.[15] The constant PEEP provided by NIMV is especially crucial for reopening the atelectatic lung areas, which is the main problem in ARDS. Furthermore, high and constant PEEP provides a more homogeneous distribution of tidal volume, inflating all lung areas.[16] Some clinical studies have shown less improvement in oxygenation with HFNCOT than with NIMV, most likely due to the lower impact of the PEEP effect of HFNCOT.[15] Others showed a decrease in the work of breathing under HFNCOT of the same magnitude as with continuous positive airway pressure.[17] Absolute contraindications of HFNCOT are still lacking, but some studies suggest serious consideration before applying it to patients whom NIMV is contraindicated.[4],[18] Patients with a decreased level of consciousness and insufficient respiratory effort may alter clinician's decisions toward invasive ventilation modalities. However, in our case, the patient was alert and responsive after naloxone administration, and bradypnea, which is a common respiratory complication of opioid overdose, did not develop.

Using HFNCOT in selected individuals may prevent significant risks associated with iatrogenic barotrauma, aspiration, hospital infections, and ventilator-associated types of pneumonia caused by IMV.[19] We presume that HFNCOT could prove beneficial in the treatment of ARDS patients due to the physiological mechanisms explained above, and possibly reduce the need for IMV.

HFNCOT is a novel technique of oxygen therapy. Its advantages in treatment and ease of use will gradually increase its use in emergency departments. As in this case, HFNCOT may decrease hypoxemia of the patient and may reduce the necessity of mechanical ventilation in patients with mild or moderate ARDS caused by opioid overdose.

The authors certify that they have obtained all appropriate patient consent forms. In the form, the patient(s) has/have given his/her/their consent for his/her/their images and other clinical information to be reported in the journal. The patients understand that their names and initials will not be published and due efforts will be made to conceal their identity, but anonymity cannot be guaranteed.

All the authors approved the final version to be published; all authors agreed to all aspects of the work. Study conception and design: MG, SS, and OY; Acquisition of data: MG, AA, OY, and SA; analysis and interpretation of data: MG, SS, and OY; drafting of manuscript: MG, SS, OY, SA, and AA; and critical revision: MG, SS, OY, SA, and AA. All authors read the manuscript and agreed to the content and data. All authors played a significant role in the article.