Vasmol, a commonly used hair dye, is becoming apparent as one of the major causes of suicidal poisoning in India. The toxic components in the dye include paraphenylenediamine, sodium ethylenediaminetetraacetic acid, resorcinol, and propylene glycol. Acute poisoning by consumption of dye leads to characteristic angioedema of the cervicofacial region along with multiorgan dysfunction. Early intervention with tracheostomy can be lifesaving in such cases and helps in preventing the morbidity and mortality associated with it.

Vasmol is a commonly used hair dye available in India. Poisoning with vasmol either as suicidal or accidental means is emerging due to its easy accessibility, extensive use, and low cost. The active components of the dye have dose dependent systemic effects. Thus, consumption in large amounts can herald fatal complications. It is crucial to make the general public aware of the serious adverse effects related to the dye and the need for early intervention to overcome them. We bring forth one such case of vasmol hair dye consumption presenting with life threatening complications which recovered with prompt management.

A 21 year old female presented to the emergency department with vomiting after an alleged history of self ingestion of vasmol dye at home. She was conscious oriented to time, place, and person. The vitals were stable with a blood pressure of 124/84mm of Hg, respiratory rate of 24 breaths per min, heart rate of 118 beats per minute, and room air saturation of 99% by the finger pulse oximeter.

Three hours postingestion, she developed facial swelling which initially involved tongue, throat, gums, and lips and rapidly progressed to involve ears, submandibular, and submental regions followed by the development of shortness of breath within an hour of onset of facial swelling. The point of care ultrasonogram of the neck done at this juncture showed normal thyroid, submandibular and parotid glands, and great vessels of the neck without any lymphadenopathy. Mild subcutaneous tissue edema was noted bilaterally in the submandibular region, a probable reaction to the dye. She also had concomitant stridor. In view of the diffuse swelling and the increasing stridor leading to respiratory compromise, she was immediately taken up for emergency tracheostomy [Figure 1] by the otolaryngologist to protect her airway. The neck X ray showed no subcutaneous emphysema [Figure 2]. After 24 hours, the swelling gradually subsided with no further respiratory distress. Subsequent chest roentgenogram revealed bilateral pleural effusion which was managed conservatively. Consequently, the patient reported passage of black colored urine which was not associated with any abdominal pain, decreased urine output, and resolved during her hospital stay. 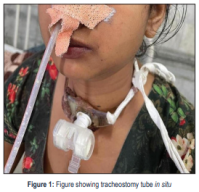 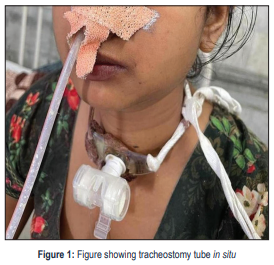 Figure 2. X-ray of the patient’s neck showing no subcutaneous emphysema
× 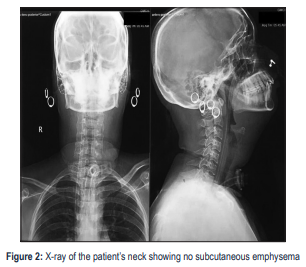 Vasmol, an inexpensive household hair dye is a major cause of suicidal and accidental poisoning in India, particularly among females. Its toxicity is manifested mainly due to paraphenylenediamine (PPD) with resorcinol, propylene glycol, cetostearyl alcohol, sodium lauryl sulfate, and preservatives being other contributors to toxicity.[1] PPD, as an active ingredient, is found in many other hair dyes including black henna. The toxicity is dose dependent and consumption of higher doses can lead to life threatening effects such as pneumothorax,[2] cardiac toxicity leading to myocarditis (15%),[3] respiratory distress requiring emergency intervention such as tracheostomy or cricothyroidotomy,[4] alveolar rupture,[5] hepatitis,[6] convulsions, coma, and sudden cardiac death. The most characteristic features seen in vasmol poisoning are cervicofacial angioneurotic edema, stridor, rhabdomyolysis, and acute kidney injury.[7] PPD exerts its action either due to direct involvement of organs such as the kidney leading to tubular damage, severe respiratory compromise due to its direct chemical insult or through alterations in the vascular permeability and by involvement of the parasympathetic nervous system.[8] A study by Naqvi et al. [9] showed acute kidney injury in 100 patients presenting to the emergency department after PPD poisoning. Suliman et al.,[10] in their study, found angioneurotic edema in 68% of patients with 15.8% requiring emergency tracheostomy.

Our patient had respiratory compromise requiring urgent tracheostomy. She did complain of passing black colored urine, but neither there was derangement of renal function tests, nor did the urinalysis show any active sediments. Hepatitis with PPD intoxication has been reported in a few studies. Ishtiaq et al. [6] showed that the frequency of acute hepatitis in PPD intoxication is high (51%) with higher mortality. Omer Sultan et al. [11] reported that markers of hepatitis (SGOT/SGPT) were significantly higher in 75% of their patients when compared to the findings of a local prospective study (40%) on PPD poisonings. Our patient also had hepatotoxicity as reported with this poisoning. There is no specific antidote available to counteract the effects of PPD. The main goals of treatment are to prevent airway compromise and acute kidney injury due to underlying rhabdomyolysis. Thus, early recognition of the symptoms and early intervention with endotracheal intubation or tracheostomy is necessary to maintain patent airway. Forced alkaline diuresis with sodium bicarbonate, isotonic normal saline, and dialysis can help in preventing renal damage.

Vasmol hair dye is becoming increasingly evident cause of poisoning due to its easy availability at an affordable rate. Early intervention and recognition of symptoms can help prevent the morbidity and mortality related to the effects of this hair dye. Public awareness and health education may further help toward early diagnosis of the symptoms. Thus, there is a need for a thorough toxicological review of the components of any ingested substance.

A proper written consent is present, which was obtained from the patient for the use of the data related to this case.

The authors certify that they have obtained all appropriate patient consent forms. In the form, the patient has given her consent for her images and other clinical information to be reported in the journal. The patient understand that name and initials will not be published and due efforts will be made to conceal identity, but anonymity cannot be guaranteed” as per the standard format.