A young boy with severe pulmonary-renal syndrome: Will you suspect IgA nephropathy?

IgA nephropathy is a renal limited form of systemic vasculitis, and pulmonary manifestations are uncommon. An initial presentation with severe diffuse alveolar hemorrhage (DAH) or pulmonary-renal syndrome is rare and only confined to a few case reports. Herein, we present a young male admitted with acute onset dyspnea, hemoptysis, and rapidly progressive renal failure. With an initial diagnosis of an immune mediated pulmonary renal syndrome, he was treated with high dose corticosteroids and therapeutic plasmapheresis along with intensive organ support (including hemodialysis, red cell transfusion, and high flow oxygen). After a detailed laboratory evaluation and kidney biopsy, IgA nephropathy was diagnosed. The patient continued to worsen with persistent DAH and died. IgA nephropathy-associated severe DAH or pulmonary-renal syndrome is rare but increasingly recognized. The condition is difficult to diagnose early and has no proven disease targeted therapy.

IgA nephropathy is a renal limited form of systemic vasculitis, and pulmonary manifestations are uncommon. An initial presentation with severe DAH or pulmonary renal syndrome is very rare and only confined to a few case reports.[2 4]

A 15 year old boy was admitted to the emergency department with a 2 week history of cough associated with rapidly progressive difficulty breathing and fever. The cough was initially dry but became mildly productive of streaky hemoptysis during the last few days. There was no history of other bleeding manifestations, skin rash, oral ulcer, hair loss, joint pain, abdominal pain, ear or nasal disease, or weight loss. His past, personal, and family histories were unremarkable except for smoking for 3 years.

On vitals examination, the blood pressure was 130/80 mmHg, pulse was 130 beats/min, respiratory rate was 30/min, and oxygen saturation was 80% on ambient air, which improved to >94% after high flow oxygen supplementation >10 L/min. General examination findings were conjunctival pallor, periorbital puffiness, and pitting edema of both legs. There was no skin rash, synovitis, or peripheral nerve thickening. Bilateral fine inspiratory crackles over lower lung fields were present. The remainder of the systemic examination was normal. 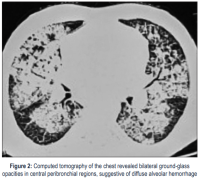 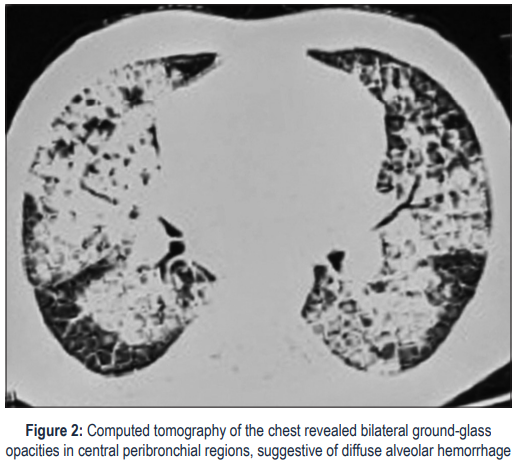 With the initial possibility of active vasculitis and pulmonary renal involvement, he received pulse methylprednisolone (1 g per day for 3 days and day 1–3 of hospitalization), followed by daily oral prednisolone (1 mg per kg per day). For progressive hypoxemia and further fall in hemoglobin(nadir, 4.8g/dL), the patient was started on therapeutic plasmapheresis from day 4 of hospitalization every alternate day (total six cycles). Testing for common etiologies for the pulmonary renal syndrome, including ANCA antibodies (anti myeloperoxidase and anti proteinase 3), antinuclear antibodies, serum complements C3 and C4 levels, double stranded deoxyribonucleic acid antibody, and anti GBM antibody, was noncontributory. Serologies for the human immunodeficiency virus, hepatitis B, and hepatitis C were negative.

To establish the diagnosis, an ultrasound guided percutaneous kidney biopsy was performed (on day 10 of hospitalization), which revealed mesangial hypercellularity and crescentic glomerulonephritis with fibrocellular and cellular crescents [Figure 3a and b]. Segmental endocapillary hypercellularity and sclerosis were detected. Interstitial fibrosis and tubular atrophy involved 60%–70% of the renal cortex. Immunofluorescence studies showed intense (3+) staining of IgA deposits in mesangium and glomerular capillary loops [Figure 3c and d]. The overall features were consistent with IgA nephropathy, and crescentic glomerulonephritis on light microscopy rendered a diagnosis of crescentic IgA nephropathy. IgA vasculitis was not considered given the absence of both clinical (cutaneous, gastrointestinal, or joint involvement) and pathological (vasculitis in kidney biopsy) characteristics. 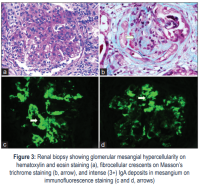 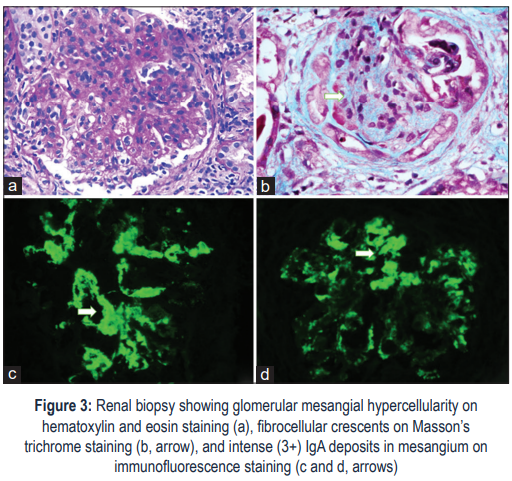 The patient received hemodialysis for azotemia (from day 1 of hospitalization, on alternate days, and a total of seven cycles) along with multiple units of packed red cell transfusions for anemia and falling hemoglobin. Empirical antibiotic piperacillin–tazobactam 2.25 g intravenous Q6H was started to cover suspected bacterial infections. High flow oxygen was supplemented through a nonrebreathing mask to maintain a saturation above 94%. Despite high dose steroids, plasmapheresis, and high quality intensive organ support, he continued to worsen. On day 15 of hospitalization, he developed massive hemoptysis. The trachea was intubated, and mechanical ventilation with volume control mode was started. For new onset hypotension, the patient received intravenous crystalloid fluid boluses and vasopressor noradrenaline infusion (0.25–0.5 μg/kg/min, i.e., 6–12 ml/h of 8 mg noradrenaline in 50 ml of 5% dextrose) to maintain a target mean arterial pressure of 65 mmHg. However, he died on the same day.

Written informed consent is present. The patient’s brother was explained about the confidentiality, and the case information will be used for education purposes only.

IgA nephropathy (Berger’s disease) remains one of the most common forms of acute and chronic glomerulonephritis worldwide.[2,3] The clinical presentation is variable and ranges from asymptomatic hematuria to rapidly progressive renal failure (RPRF) and chronic kidney disease. In a classic clinical scenario, a male patient in his second or third decade of life develops gross hematuria within 1–2 days of a viral infection, typically affecting the upper respiratory tract (synpharyngitic hematuria). However, many patients have no apparent symptoms in the early stages of the disease, and microscopic hematuria and proteinuria may be persistently or intermittently detected for many years.[2 4] The index case had microscopic hematuria and RPRF at admission.

Respiratory manifestations such as shortness of breath and cough are uncommon in IgA nephropathy and are usually attributed to anemia results from episodic gross hematuria, fluid overload in advanced renal disease, or lung infections predisposed after immunosuppressive therapy. DAH is infrequently occurred with IgA nephropathy and may appear before, simultaneously, or after the development of renal injury.[5] Moreover, pulmonary renal syndrome with DAH and rapidly progressive glomerulonephritis as initial presentation is exquisitely rare and was noted in only five cases in a recent systemic review.[5]

Like renal manifestations of IgA nephropathy, DAH is usually reported in young males. Clinical presentation is similar to other autoimmune causes; however, the diagnosis requires renal or lung biopsy in the absence of serological markers. Figure 4 shows a diagnostic approach to DAH in the emergency department. Compared to other immune causes, IgA nephropathy associated DAH has a mixed response to immunosuppressive therapy (including high dose steroid and cyclophosphamide) or plasmapheresis, and mortality remains substantially high. High immunosuppression may further predispose these patients to an elevated risk of infection, given their frequent need for intensive care unit admission.[3,6,7] The lack of serological markers for early recognition and no proven disease targeted therapy are primary factors responsible for high mortality. 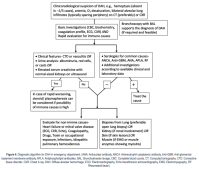 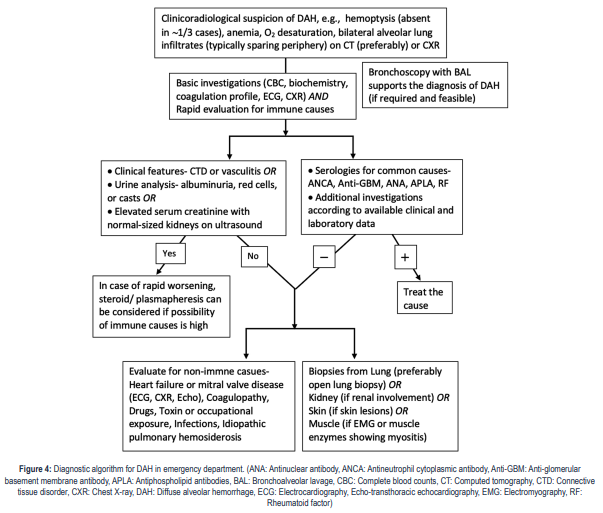 Prompt recognition of pulmonary renal syndrome with immediate initiation of steroids followed by plasmapheresis, confirmatory diagnosis of IgA nephropathy on renal pathology, and exclusion of alternate causes were the strengths of the index case. The nonavailability of pulmonary histopathology remained the major limitation. Because the patient was critically ill and required organ support, high dose steroids and plasmapheresis were already started, and a kidney biopsy had been performed; the lung biopsy (radioimaging guided or open) was not considered. Transbronchial biopsy has a low diagnostic yield in DAH.[1]

IgA nephropathy is the most common glomerulonephritis that typically occurs without systemic symptoms. A presentation with severe DAH or pulmonary renal syndrome is rare but increasingly recognized and life threatening. Novel diagnostic biomarkers, advances in understanding the molecular basis of the pathogenesis, and targeted treatment are required to improve outcomes.

Written informed patient consent/next of kin are present. The patient’s brother was explained about the confidentiality, and the case information will be used for education purposes only.