METHODS: A descriptive study using a retrospective chart review was conducted on medical records of 270 patients with AIS who presented to the ED of a tertiary university hospital in the northeast of Iran from March 22 to September 22, 2019. The steps of this review process included instrument identification, medical records retrieval, data extraction, and data verification.

Stroke is the third leading cause of death globally behind cardiovascular disease and cancer[1] and accounts for the fourth leading cause of death in the United States (US).[2] According to the American Heart Association, in 2019, stroke accounted for 1 of every 19 deaths in the US.[3] With the aging population, the prevalence of patients with stroke is projected to increase and lead to an additional 4 million Americans aged 18 years or older with stroke in 2030 relative to 2010.[4] These figures are staggering and yet, there is an even higher incidence of stroke in low and middle income countries.[5] In fact, 87% of the 5.7 million stroke patients who died in 2005 were from low and middle income countries.[6] According to the World Bank Group, Iran is a middle income country and recent reports indicate that 139/100,000 individuals in Iran suffer from new strokes annually, which is higher than most western countries.[7]

Despite recent advances in the treatment of stroke, it remains a major cause of mortality and morbidity in adults.[8] Although there is no definitive cure for acute ischemic stroke (AIS), using intravenous recombinant tissue plasminogen activator (IV r tPA) can have an impressive impact on the management of patients with AIS and greatly reduces the burden of the disease.[9] Time is the biggest challenge of this treatment method and the success of treatment and resultant patient outcomes depend on timely diagnosis of AIS and early administration of IV r tPA.[10] Specifically, IV r tPA is an effective AIS treatment when administered within 4.5 h of symptom onset[11] and prehospital or in hospital delays may lead to the loss of opportunity for optimal use.[12]

Given the importance of time in reperfusion of ischemic brain tissue, most hospitals have created multidisciplinary rapid response teams to provide timely emergency services to patients with AIS. However, many studies have shown deficiencies and inconsistencies in achieving the desired outcomes.[13,14] It is essential to evaluate the performance of stroke emergency programs in order to identify insufficiencies and the underlying components that affect timely provision of emergency services to patients with AIS. This study investigated the current status of AIS management in an emergency department (ED) at Sabzevar Vasei Hospital in Iran. Considering the lack of sufficient and reliable information on the status of guideline based AIS care in Iran, our findings can be informative for other similar middle income countries with evolving health care systems that differ in structure from US and European systems.

A descriptive study using a retrospective chart review was conducted on medical records of patients with AIS who presented to the ED of Vasei University Hospital in Sabzevar, Iran.

This hospital is a 220 bed tertiary academic medical center with a 19 bed ED that had 93,198 ED visits in 2019. The ED is staffed by faculty emergency medicine attending physicians 24 h a day, as well as senior medical students (interns), nurses, and nursing students. In this ED, patients with AIS are evaluated for IV r tPA eligibility based on standard inclusion and exclusion criteria, within a 4.5 h window from their last known well time. The eligible patients are managed in a step by step approach as illustrated in Figure 1. 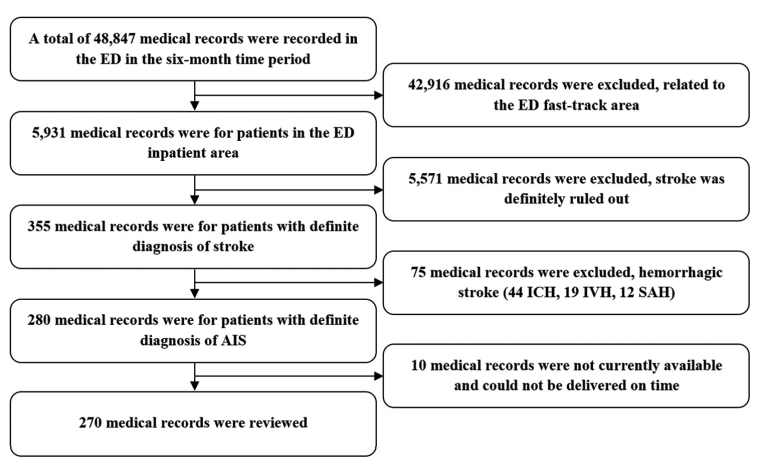 Patients with an ED discharge diagnosis of AIS were included for analysis according to the following inclusion criteria: AIS confirmed by a stroke neurologist and a noncontrast brain CT result that ruled out other causes (such as hemorrhagic stroke).

Methods of measurement and data collection and processing

Given the descriptive nature of this study, it was not deemed necessary to establish power, and data were collected during a 6 month period consistent with the investigators’ time constraints from March 22, 2019, to September 22, 2019. All medical records within the study timeframe were reviewed manually because the patients’ information was kept in a nonelectronic filing system. Figure 2 demonstrates patient selection and the flow of the study. 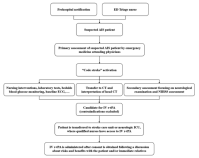 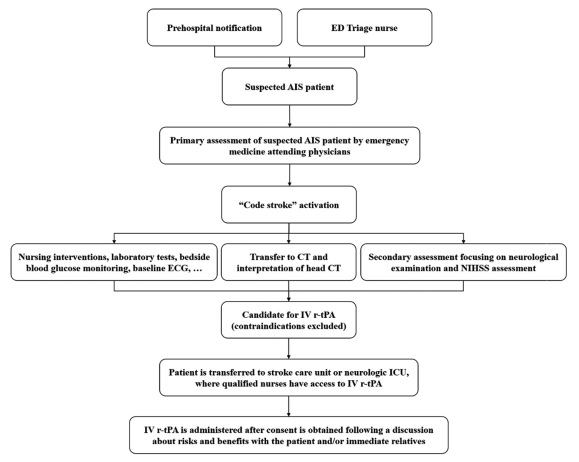 A data extraction form developed by Hassankhani et al. based on an extensive review of the literature and specific ED guidelines for stroke management[14] was used for collecting data. Use of this structured instrument helped ensure the measure of consistency, minimized the possibility of interpretation in data collection, and included patients’ demographic characteristics, disease related characteristics, in hospital stroke management times, and main barriers to stroke care pathways. Content and face validity of the instrument were established by Hassankhani et al. using a qualitative “expert panel” approach. In their study, the intra rater reliability of data collection method was evaluated and the reported intraclass correlation coefficient (ICC) value was 0.94 (indicating an excellent reliability) with a 95% confidence interval(CI) of 0.88–0.97. In the present study, the instrument was piloted on 30 randomized medical records and intra rater reliability measurement was computed with an ICC. The obtained ICC value was 0.89 indicates a high intra rater reliability (CI 95% of 0.83–0.91) based on a single rater, absolute agreement, and two way mixed effects model.[15] The data of the pilot study were not included in results because it represented an initial validation of our methods.

To ensure the quality of the data extraction, the data were manually collected by a trained abstractor who was (a) blinded to the purpose of the study, and (b) familiar with the site’s medical record documents and documentation. Since missing, conflicting, and/or ambiguous chart elements can be a concern in retrospective chart reviews, any discrepancies during the coding process were reviewed and clarified jointly by the research team. The data were collected in a secure onsite location to avoid the loss of charts and confidential information. Moreover, the data were entered without patients’ names, addresses, and other identifying features to ensure anonymity.

The primary outcome of the study was to evaluate the current status of AIS Management and our ED performance in stroke door to needle (DTN) times. Secondary outcomes were to determine stroke code activation rate, IV r tPA administration rate for eligible patients, contributing factors of treatment delays, disease related characteristics of patients with AIS, and main barriers to stroke care pathways.

The study was part of a nursing master thesis approved by the institutional review board and the research ethics committee of Semnan University of Medical Sciences (date of the ethical approval: June 2, 2020. number of the ethical approval: IR.SEMUMS.REC.1399.074). The objectives of the study were explained to officials of the Vasei University Hospital. The institutional review board waived the requirement for informed consent because this study involved a retrospective review of medical records. Data extraction and abstraction were performed with methods to ensure patient confidentiality according to the Privacy Rule (the data were collected in a secure onsite location to avoid the loss of medical records and provided without patients’ names, addresses, and other identifying information).

The rate of walk in patients was 58.5% (n = 158). Emergency medical technicians provided out of hospital notification for 7.4% of patients (n = 20), which implies that emergency medical services (EMS) are clearly underused for rapid triage and transport of stroke patients in our region. No patient was transferred out and only 1.1% of patients with AIS (n = 3) were admitted to a non stroke medical unit. 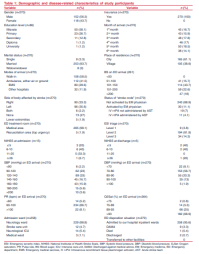 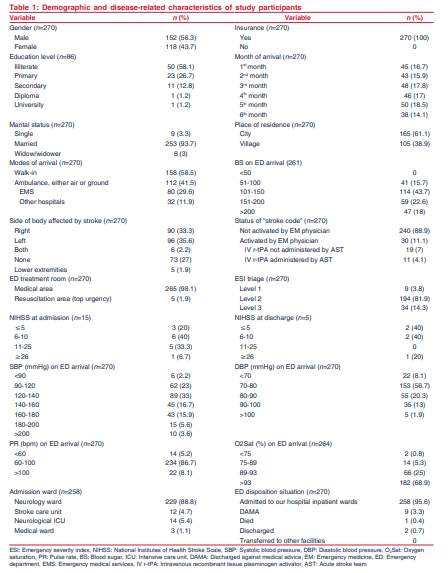 In patients who received IV r tPA, the median DTN time was 70 min (IQR: 47–90 min). The acute stroke team achieved a DTN time of 60 min or less in 4 out of 11 patients and a DTN time of 45 min or less just in 2 out of 11 patients. Since mechanical thrombectomy was not available at the hospital, none of the patients with AIS underwent mechanical thrombectomy or other emergency endovascular treatments.

A Mann–Whitney U test across ED throughputs indicated that the majority of stroke related performance time intervals (except door to admission time) were significantly faster and more favorable in potentially eligible patients with AIS who were managed with stroke team activation compared to ineligible AIS patients with no stroke team activation (P < 0.05). The results of Mann–Whitney U test, which was applied to analyze critical time intervals among different status of “Stroke Code,” are also summarized in Table 2.

The early presentation of patients with AIS to the EDs in our country and similar developing countries may be impeded by cultural, perceptual, and behavioral factors such as poor recognition of stroke symptoms, tendency to minimize the importance of symptoms, low threat perception among the public, and lack of rapid transportation to the hospital. Therefore, along with a need for rapid recognition and reaction to stroke, it is necessary to educate the public and dispel misconceptions about the urgency of stroke symptoms.[14]

In our study, the median DTN time was 70 min which is substantially longer than the results achieved after the implementation of the Get With the Guidelines (GWTG) Stroke program in the US,[20] the Hurry Acute Stroke Treatment and Evaluation project in Canada,[21] and the Safe Implementation of Treatment in Stroke initiative in Europe.[22] Recent studies have found that delayed DTN times in patients with AIS who were treated with IV r tPA were significantly associated with poor clinical outcomes,[23] higher all cause mortality at 1 year, and higher likelihood of all cause readmission at 1 year.[24] This evidence propelled the American Stroke Association to set more aggressive targets for timely treatment with IV r tPA. The primary goals of phase III of the GWTG Stroke program are to achieve DTN times within 60 min for 85% or more of AIS patients treated with IV r tPA, with secondary goals of decreasing DTN times to 45 min (in 75% or more) and 30 min (in 50% or more).[19] Therefore, further clinical, managerial, and governmental efforts are required for stroke care responsiveness in Iran and similar settings.

Specific to the stroke care system at our hospital site, we make the following recommendations to other low to middle income countries with similar systems and barriers: establishing a more robust protocol for out of hospital notification and EMS direct to computed tomography (CT) scan; administering IV r tPA in the ED or CT scan unit instead of neurologic intensive care unit; organizing a joint collaboration among emergency medicine, neurology, and radiology departments to enhance hospital performance in stroke care; establishing mechanical thrombectomy services and integrating endovascular providers into the current teamwork; and establishing clear performance goals for the ED and acute stroke team with effective stroke surveillance systems for continuous data collection and quality improvement. Moreover, appointing an emergency nursing coordinator to help patients with AIS fulfill benchmarks on written protocols may also improve DTN times.

Our study has several limitations worth noting. First, the data quality and completeness depended on the quality of the documentation in paper based medical records; there could be variation based on providers’ documentation skills and level of knowledge. While recent stroke treatment studies have used the NIHSS score with a 90 day mRS score documentation as a primary outcome, the NIHSS and mRS scores were not documented in sufficient numbers to allow for a reliable description of the current situation. In addition, we could not factor in the role or importance of mechanical thrombectomy in the care of these patients. Last, we could not reliably capture outpatient follow up.

This study is funded by the research deputy of Semnan University of Medical Sciences (Project No. A‑10‑78‑8). The funding sources had no role in the study design, in the gathering, analysis, and interpretation of data, in the report’s writing, and in the decision to submit the manuscript for publication. The corresponding author affirms that he had complete access to all the data in the study and had final responsibility for the decision to submit for publication.

The authors would like to thank all those who spent their valuable time participating in this research project, and we are also immensely grateful to the “anonymous” reviewers.