Brugada syndrome (BS) is a genetic channelopathy syndrome that causes fatal cardiac dysrhythmias and sudden death. Fever and antiarrhythmics are aggravating factors of BS. There are many reports about BS preceded by fever but fewer reports on BS caused by hypercalcemia (HC). Here, we describe a unique case of BS preceded by concurrent fever and HC. A 46 year old male visited the emergency department for malaise and fever. During admission, he suddenly developed cardiac arrest and ventricular fibrillation (VF). After resuscitation, electrocardiogram (ECG) showed “coved type” ST elevation in V1 and V2, which led to the diagnosis of BS. This ST change declined after the fever subsided. He also had HC at the same time. After admission, he developed septic shock. We started treatment assuming that it was caused by the aggravation of ulcerative colitis, and liver abscess was revealed on contrast enhanced computed tomography. After the infection was controlled, we implanted an implantable cardioverter defibrillator (ICD) and he was discharged. The cause of HC appeared to be an ectopic parathyroid adenoma, and calcium was normalized after tumor resection. In addition, this patient had nonfunctional pituitary adenoma and a nonfunctional adrenal tumor. His condition was indicative of multiple endocrine neoplasia type 1. This patient had BS presenting as VF induced by fever due to liver abscess and early repolarization, increasing the risk of arrhythmic events to carry out ICD implantation. HC can contribute to induce arrhythmia.

Brugada syndrome (BS) is a genetic channelopathy syndrome that causes fatal cardiac dysrhythmias and sudden death. Fever, antiarrhythmics, and electrolytes are the unmasking and aggravating factors of BS.[1] There are many reports stating BS that is precipitated by fever.[2] However, few studies have reported that preceding hypercalcemia (HC) and subsequent arrhythmia are related to BS.[3 6] Here, we describe a unique case of BS preceded by fever and HC.

A 46 year old man weighing 63 kg with ulcerative colitis had malaise, fever, and loss of appetite 3 days before admission. On arrival at the emergency department, his blood pressure was 124/46 mmHg, heart rate was 122 beats per min, SpO2 was 98% in room air, respiratory rate was 16/min, body temperature was 40.2°C, and he was alert. He was lying in bed because of chills and nausea. Suddenly, the patient developed cardiac arrest, and chest compression and tracheal intubation were immediately initiated. Electrocardiogram (ECG) showed ventricular fibrillation (VF). Defibrillation was performed twice, and adrenaline was administered once. After resuscitating the patient, a cardiologist diagnosed the patient with BS because the ECG showed a “coved type” ST elevation in V1 and V2 [Figure 1, No. 4]. This was improved when the patient’s fever subsided with acetaminophen [Figure 1, No. 3]. He also had HC level of 14.8 mg/dL at the same time. After admission to the intensive care unit, he developed hypotension. We suspected septic shock from ulcerative colitis exacerbation because computed tomography (CT) scan showed a high density area in the descending colon and blood sample data, which showed an increase in the lactate level, white blood cell count, and procalcitonin level. We initiated tazobactam piperacillin and vasopressors. On day 2 of admission, extubation was performed because the patient was stable. On day 5 of admission, fever reoccurred, and a contrast enhanced CT scan revealed a round low density area of his liver in both the arterial and venous phases, which was determined to be a liver abscess. We changed the antibiotics to meropenem and vancomycin and maintained the same for 3 weeks and performed puncture drainage. After the infection was controlled, on day 30 of admission, the cardiologist confirmed a positive pilsicainide test result, and implantation of an implantable cardioverter defibrillator (ICD) was performed. The patient was then discharged. The patient’s family history revealed that one of his maternal uncles had experienced sudden death. An endocrinologist examined the causes of HC. It was associated with high parathyroid hormone levels, and on investigation with Tc scintigraphy, abnormal uptake in the anterior mediastinum was observed. After his discharge, tumor resection was performed. Further, ECG and serum calcium level were followed up and treated [ECG is shown in Figure 1, No. 1 and 2]. Pathological diagnosis was determined for an ectopic parathyroid adenoma. In addition, CT and magnetic resonance imaging revealed tumors in the pituitary and adrenal glands. The endocrinologist proved that these were nonfunctional pituitary adenomas and nonfunctional adrenal tumors. The patient was finally presumed to have multiple endocrine neoplasia type 1 (MEN1). Written informed consent was obtained from the patient for the publication of this case report and accompanying images. 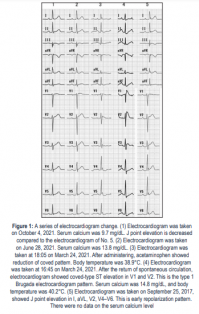 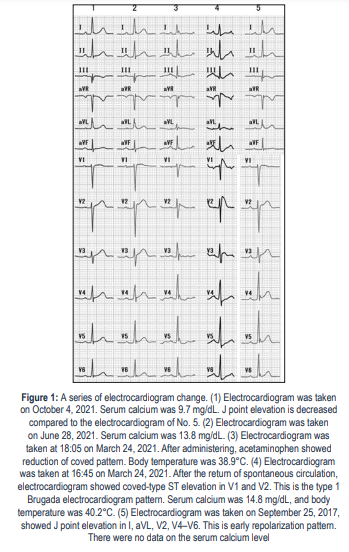 Based on his history of present illness and ECG, we diagnosed the patient with BS and assumed that this was induced by fever. Moreover, there was inferolateral early repolarization [Figure 1, No. 2 5]. These findings suggest that the patient was at high risk for arrhythmic events. Therefore, an ICD was implanted.

BS can present in fatal arrhythmic events as in our case, which can be precipitated by fever. Even though the Brugada pattern improved after the fever had resolved, the J point elevation still persisted until calcium level improved, which indicates HC can be a potential trigger to the induction of VF.

Written informed consent was obtained from the patient for the publication of this case report and accompanying images.

HN, YA, and YS were involved in the initial management of this case. YS diagnosed the patient’s disease and performed ICD. RI searched for the cause of his hypercalcemia and suggested the diagnosis of MEN1. HN wrote the paper. All authors read and approved the final manuscript.
Data availability statement: None.

I would like to thank the staff at Tsuchiura Kyodo Hospital and Editage (www.editage.com) for English language editing.