Comparison of pain and extent of anesthesia in digital blocks for isolated finger lacerations: A randomized controlled trial

OBJECTIVES: Digital injuries are among the most common presentations to the emergency department. In order to sufficiently examine and manage these injuries, adequate, prompt, and predictable anesthesia is essential. In this trial, we aim to primarily compare the degree of pain and anesthesia onset time between the two injection dorsal block technique (TD) and the single injection volar subcutaneous block (SV) technique. Further, we describe the temporal and anatomical effects of both techniques for an accurate delineation of the anesthetized regions.

METHODS: This is a single center prospective randomized controlled trial involving patients presenting with isolated wounds to the fingers requiring primary repair under local anesthesia. Patients were randomized to either the SV or TD blocks. The primary outcome was procedure related pain (Numerical Rating Scale). Further, we assessed the extent of anesthesia along with the anesthesia onset time.

RESULTS: A total of 100 patients were included in the final analysis, 50 on each arm of the study. The median pain score during injection was significantly higher in patients who received TD block than patients who received SV block (median [interquartile range] = 4 [2.25, 5.00] vs. 3.00 [2.00, 4.00], respectively, P = 0.006). However, anesthesia onset time was not statistically different among the groups (P = 0.39). The extent of anesthesia was more predictable in the dorsal block compared to the volar block.

CONCLUSION: The single injection volar subcutaneous blocks are less painful with a similar anesthesia onset time. Injuries presenting in the proximal dorsal region may benefit from the two injection dorsal blocks, given the anatomical differences and timely anesthesia of the region.

Digital injuries are among the most common p r ese nt at i ons t o t h e emergency department.[1] In order to sufficiently examine and manage these injuries, adequate analgesia is commonly achieved either through local infiltration at the site of injury with a local anesthetic or by performing a digital nerve block. The latter represents the preferred technique, producing a less painful and a more predictable result.[2,3] Common among the various described digital nerve blocks,[4 7] are the traditional two injection dorsal block technique (TD)[6] and the single injection volar subcutaneous block (SV) technique.[7]

The single injection volar subcutaneous block (SV) technique was first described by Harrison in 1991, requiring one subcutaneous injection at the volar side of the finger base.[7] Braun and Harris described the TD technique, whereby a local anesthetic is injected at each side of the finger base. For this technique, two separate dorsal injections are administered, one in each web space.[6]

We hypothesize that the SV technique is less painful than the TD technique. In this trial, we aim to primarily compare the degree of procedure related pain and anesthesia onset time between the two block techniques. Further, we describe the temporal and anatomical effects of both techniques for an accurate delineation of the anesthetized regions.

This was a single center, prospective randomized controlled trial. Informed consent was obtained from eligible patients prior to their inclusion in the study. The study was conducted in accordance with the 1964 Helsinki Declaration, approved by the Kuwaiti Ethical Committee board on the 6th of January, 2021 (UID 1742/2021), and registered on Research Registry (UIN: 6693). This study adheres to the appropriate CONSORT guidelines.

One hundred (n = 100) eligible participants over 18 years of age who presented with an isolated laceration to a single finger requiring primary repair under local anesthesia were included. The exclusion criteria included known allergies to local anesthesia, the presence of distracting concomitant injuries, multiple digital injuries, peripheral neuropathy, open fractures, finger infections, and tendon injuries. Injuries to the proximal dorsal aspect of the finger were excluded, as well as injuries to the thumb. The three volar anatomical regions of the finger were divided according to the proximal, middle, and distal joint creases, with the dorsal divisions corresponding to the volar. Further, patients with fractures, dislocations, and traumatic foreign bodies were also excluded. Finally, the included patients did not receive any form of intravenous or oral analgesia. The sample size calculation for this study was based on a two tailed t test for two independent groups (dorsal vs. volar blocks). A study with an effect size of 1 and a power of 90% required a total sample of 54 to test the association at a 5% alpha level. The power calculation was carried out using G*Power 3.1.9.

Consecutive patients were selected in the emergency department of a tertiary orthopedic center if they met the inclusion criteria. Patients were block randomized to receive either the TD or SV techniques by computer generated lists equally distributed to four trained providers. The four blocks corresponding to the number of the surgeons consisted of either 12 volar and 13 dorsal or 13 volar and 12 dorsal, making four blocks of 25 patients distributed to each surgeon. The order of the blocks and the patients within the block were randomized via a computer generated sequence, which was concealed from the operator until a participant was enrolled.

The primary outcome was pain measured using the Numerical Rating Scale (NRS), labeled 0 (painless) to 10 (worst pain). Measurements were taken across two stages, before the administration of local anesthesia (injury related pain) and during administration (procedure related pain). Patients were further evaluated for the anesthesia onset time and the extent of anesthesia according to each region of the digit. The anesthesia onset time was assessed by using a needle prick in each of the six regions of the finger at 30 s intervals. The extent of anesthesia for each region of the finger was simultaneously recorded through the same technique, and the effect of anesthesia was obtained accordingly.

Statistical analysis was performed using R 3.6.3. Counts and percentages were used to summarize categorical variables. The mean ± standard deviation (standard deviation) or the median/interquartile range (IQR) was used to summarize the distribution of continuous normal and nonnormal variables, respectively. Unpaired t test and Mann–Whitney test were used to assess the balance between groups at baseline for continuous normal and nonnormal variables, respectively. Chi square test of independence was used to compare the distribution of categorical variables between patients who received TD and SV nerve blocks.

Between January 2021 and June 2021, a total of 100patients were consecutively recruited and randomized to receive either TD (n = 50) or SV (n = 50) block [Figure 1]. Eight patients were excluded for not meeting inclusion criteria: two excluded on the basis of peripheral neuropathy, four excluded due to injury on the proximal dorsal aspect of the finger, and two excluded for the suspected presence of a foreign body. 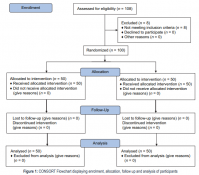 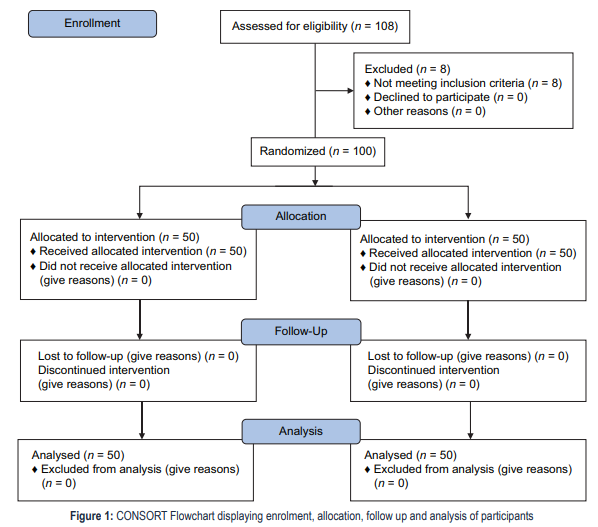 The descriptive characteristics of our study population are displayed in Table 1. No statistical significance was observed between the distributions (P > 0.05) except the finger injured (P < 0.05). The majority of the injuries were distal (38%) and affected the volar aspect of the fingers (67%). Differences of age, baseline pain, sex, and injury type were not significant, thereby ensuring comparability across these groups.

Table 1. Distribution and between‑group comparisons of participants according to patient and injury factors 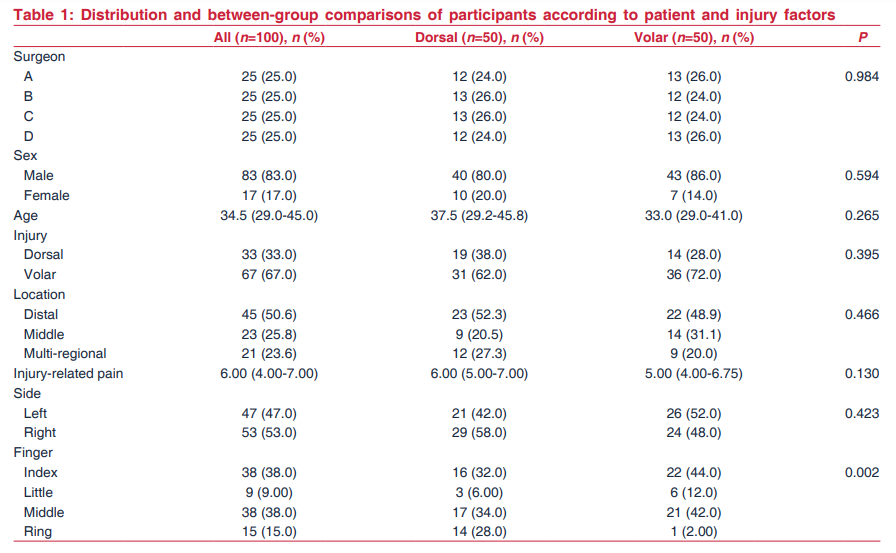 The results of the primary outcomes are displayed in Tables 2 and 3 and Figure 2. The median procedure related pain score was significantly higher in patients who received TD nerve block than patients who received SV nerve block (median [IQR] = 4 [2.25, 5.00] vs. 3.00 [2.00, 4.00], respectively). The difference in the procedure related pain between the two groups was 1 (95% confidence interval [CI]: 0.25; 1.75). However, anesthesia onset time was not statistically different among the groups (P = 0.39).

Table 2. The difference in the median procedure‑related pain between groups 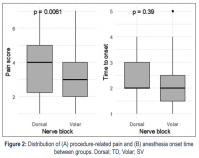 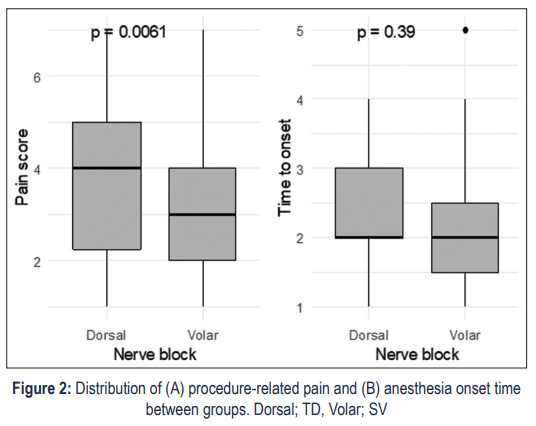 Results showed that the difference in median NRS was statistically significant, as evidenced by the 95% CI that does not include zero. 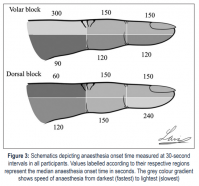 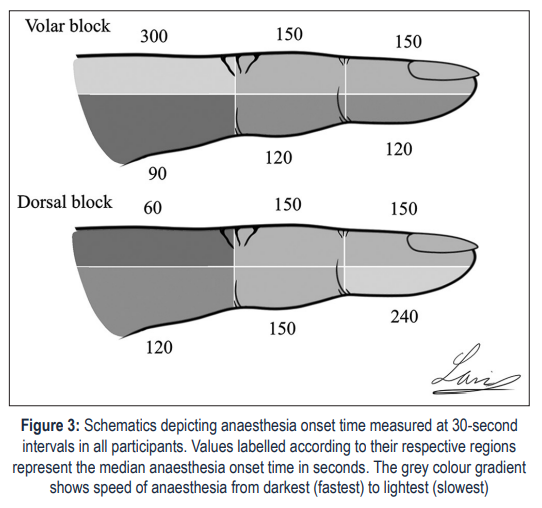 Sensory innervation of each digit is provided by four digital nerves entering the finger base bilaterally: two at the volar and two at the dorsal side. Targeting those nerves effectively while minimizing patient discomfort forms the basis of a desirable digital block. The technique of injecting the local anesthetic into the SC tissue above the flexor tendon sheath at the volar side of the hand was described by Low et al. [9] This technique is intended to reduce the risk of neurovascular injury that may be associated with the TD technique into the sides of the digit.

In this trial, we compared the two injection dorsal block and single injection volar subcutaneous block techniques by assessing procedure related pain as well as the extent of anesthesia across the six regions of the finger. Our results showed that the mean pain score was significantly lower in patients who received a SV nerve block compared to patients who received TD nerve block. In similar trials, there is considerable heterogeneity related to the sample size, pain score used, severity of injury, type of injury, the comparison of blocks, and the local anesthesia used.[10 13] Yet despite this, there have been consistent results showing lower pain scores in the volar block,[12,14 17] despite statistical insignificance. Further, data suggest that patients prefer the SV injection.[14 16] Clement et al. and Cannon et al. both reported greater clinician satisfaction with the volar block, due to ease of administration and patient response.[12,15]

The time to onset was not statistically significant among our groups [Figure 3]. Our results showed a faster onset of anesthesia with the SV on the volar aspect. Okur et al. assessed time to complete anesthesia of the finger yielding similar results to our study.[18] While the TD more effectively anesthetized the proximal dorsal region, consistent with recent reports by Clement et al. [12] We found that the proximal dorsal region was eventually anesthetized by the volar block, albeit less timely, predictably, and effectively. Previous studies noted an increased risk of incomplete anesthesia over the proximal dorsal region, findings that were partially consistent with ours.[13,14] In addition, although we did not examine the duration of action for the TD technique, Afridi et al. reported a longer duration of action for the SV technique compared with the TD technique.[11]

As a limitation of our study, the various tangential techniques employed by some providers to reduce pain, which could have a significant impact and contribute to important variability, have not been examined. These include buffering the solution with sodium bicarbonate, smaller needle gauges, solutions at room temperature, pinching loose skin or creating “sensory noise” near the injection site, and injecting at 90°.[19 24] In addition, the study did not investigate patient and provider preference, a potential underlying element of which is the number of injections. However, confidence in our comparisons is achieved by the reasonably sized sample which removed sources of confounding by excluding complex presentations and including a single injury type. In addition, in an effort to accurately assess the extent of the temporal and regional effects of the blocks, we assessed variables at short 30 s intervals, compared with previous studies which employed 5 and 10 min intervals from the time of injection.[25,26]

Written consent was obtained from all included participants.