Multiple sites bullet embolism as a cause of acute abdomen

Bullet embolism (BE) is a rare and misdiagnosed phenomenon that can significantly affect the cardiovascular system. It occurs when a bullet enters and migrates through the body vessels in gunshot victims. We report in this article a case of a 25-year-old male patient, victim of penetrating trauma caused by a firearm projectile that presented two embolism destinations with acute ischemic repercussions: the right brachial artery and the branches of the superior mesenteric artery. We quickly performed surgical exploration to assess the level of ischemia and resect the foreign body. To the best of the authors' knowledge, this is the only case of acute vascular abdomen due to BE in the literature. There is no standard treatment for BE, and each case should be studied according to signs and symptoms while considering the risks of the destination vessel for the victim. Imaging is necessary for early diagnosis, and the medical team must be aware of multiple and extraordinary critical ischemia presentations when bullet trajectory suggests embolism.

Bullet embolism (BE) is a rare vascular trauma that occurs when a bullet penetrates the cardiovascular system. Nonspecificity of signs and symptoms and the distance of the embolus in relation to the initial lesion in the cutaneous/subcutaneous tissues figure in the clinical picture of BE and may result in severe sequelae to the patient, especially ischemia and thrombosis.[1]

In 1978, Rich et al.[2] studied BE from gunshot wounds during the Vietnam War and concluded that there was an incidence of 0.3%. The incidence in civil firearms violence has not been evidenced; however, the penetration caused by less powerful nonmilitary weapons has a greater predisposition to result in embolization.[3] Michelassi et al.[4] reported that 85% of the cases of ballistic embolization, described in the literature since 1990, were a consequence of civilian violence.

This article aims to report the case of a 25-year-old male, victim of multiple gunshot wounds that evolved with BE in two distinct destinations: the right brachial artery and the branches of the superior mesenteric artery, thus needing, promptly, surgical exploration in both sites.

A 25-year-old male was a victim of multiple perforations by firearm. He was admitted with patent airway, decreased bilateral vesicular murmur, subcutaneous emphysema in the left hemithorax, and hemodynamically stable that resulted in the Revised Trauma Score of 8 points. He was conscious and oriented (Glasgow coma score 15), with motor and sensory deficit in the lower limbs. He had flaccid and painless abdomen. During inspection, he presented three firearm entry perforations: (1) right zygomatic face region, (2) left paravertebral line at the angle of the scapula, and (3) anterior left shoulder; all without exit orifices. There were no past surgery and no relevant clinical history.

The patient was initially submitted to chest drainage with immediate discharge of 500 ml serum–hematic liquid. Chest tomography revealed metallic artifacts in the lingula of the left lung associated with a comminuted fracture of the fifth costal arch (probably trajectory caused by 3-entry wound bullet). The same radiologic examination revealed the bullet of 2-entry wound in the vertebral canal linked with Frankel A fracture (T9–T10).

Lower slices of the chest tomography exhibited portal venous gas, and exploratory laparotomy was indicated [Figure 1]. At that time, there were no signs of abdominal tenderness. Surgical findings were compatible with intestinal ischemia, affecting 240 cm ileum segment, associated with no penetration of the bullet into the peritoneal cavity [Figure 2]a. Then, we performed resection of affected ileum segment and ileostomy.

Figure 1. Chest tomography of the patient who suffered firearm shot. (a) We observed hypodense lesion compatible with gas filling the portal venous and its branches up to the hepatic periphery. (b) Metallic artifact is evidenced in the cardiac topography (black arrow) and it suggested bullet embolism
× 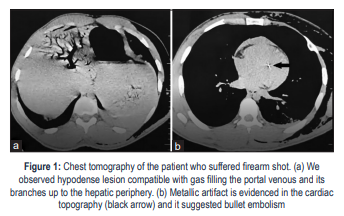 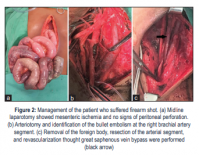 Figure 2. Management of the patient who suffered firearm shot. (a) Midline laparotomy showed mesenteric ischemia and no signs of peritoneal perforation. (b) Arteriotomy and identification of the bullet embolism at the right brachial artery segment. (c) Removal of the foreign body, resection of the arterial segment, and revascularization thought great saphenous vein bypass were performed (black arrow)
× 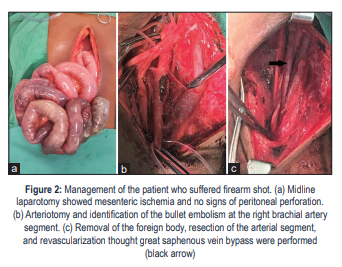 The patient evolved on the 10th day of hospitalization with pain, edema, and decreased distal pulses in the right upper limb. Doppler ultrasonography was performed, and a metallic projectile was seen inside of the right brachial artery lumen. The diagnosis was confirmed after arteriography that also did not identify extravasation and pseudoaneurysms in the aorta. The right brachial artery was explored through conventional surgery, and BE was identified [Figure 2]b. Revascularization was successfully done by a great saphenous vein bypass segment [Figure 2]c, following arteriotomy, removal of the foreign body, and resection of the arterial segment [Figure 3]. 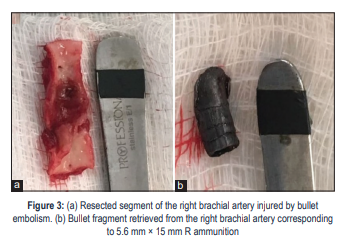 Subsequently, reviewing the case with radiology staff revealed a metallic artifact in the cardiac region in the first tomography. Echocardiogram was performed and did not identify cardiac injury or presence of artifacts at the end of hospitalization. The patient underwent conservative treatment for spine trauma and was discharged after 1 week of postoperative management. Outpatient follow-up undertaken with no complications or complaints was recorded over the last 12 months.

To the best of the authors' knowledge, this is the only case in the literature where BE occurs in the mesenteric artery branches with subsequent acute abdominal vascular emergency, including more than one embolization destiny. In a literature review, Aidinian et al.[4]revealed that about one-third of BE cases occur with multiple fragments impaction destinies, as this case describes. However, it is rare to affect arterial branches of the abdominal organs.[3] Renal artery embolization has been reported,[5] and only one case of BE affecting the portal system.[6]

In this case, the bullet probably penetrated the circulatory system through the left pulmonary vein, once delayed arteriography showed no aorta or abdominal vessels lesions. Small fragment immediately migrated to mesenteric artery branches, and the larger bullet piece migrated 10 days after initial trauma to the right brachial artery. Unfortunately, it was not possible to perform angiography image of the abdominal vessels once exploratory laparotomy was already indicated due to the portal vein gas. Postlaparotomy arteriography was performed only when signs and symptoms showed that it was relevant for patient management. The diagnosis of this rare entity was made with surgery findings and trauma mechanism. There was no abdominal perforation, hemoperitoneum, organ injury, or clinical history that would justified intestinal ischemia.

The bullet entry occurs more frequently in the venous system compared to the arterial.[4] BE in the right circulation is generally asymptomatic, whereas left involvement implies high complication rates.[7] In the present case, there was acute arterial occlusion of the right brachial artery and intestinal ischemia.

BE in the left circulation generally follows the anterograde direction, tending to impact lower limbs arteries.[8] In upper limb, embolization goes more frequently toward the vessels on the right side due to greater diameter of the brachiocephalic trunk. We understand that this case BE followed the anatomical and epidemiological trending, despite contralateral entry site.[3],[9]

In the absence of a bullet exit wound, the diagnosis of BE should be suspected: the team must be attentive to ischemic signs and symptoms and to radiological follow-up compatible with patient's clinical presentation. Despite late definitive diagnosis, mesenteric ischemia and acute arterial occlusion of the right upper limb were successfully addressed. In this case, ultrasound and further confirmation through arteriography were successfully done.

Compared to the literature, surgical removal was instituted in 64% of BE in arterial circulation, compared to 30% in venous system.[3]Symptomatic cases, regardless of location, are generally addressed.[1] It is recommended that the bullet be retrieved from arterial circulation, regardless of the presence or absence of acute symptoms, due to the high long-term risk of critical ischemia.[3],[8] It must be carried out by local arteriotomy and removal of the bullet under direct view.[7] This technique avoids vascular injury that can occur during embolectomy.

Conservative treatment is generally chosen in venous BE, but there is a notable growth of endovascular surgery retrieval.[10] This technique performs positively from 53% to 63%, and due to lower rates of complications, it is a good alternative in terms of the risk–benefit to the patient.

BE is a rare vascular trauma and seldom experienced by accident and emergency medical teams. This paper reports the only known case in the literature of acute vascular abdomen caused by multiple sites BE. Imaging is necessary for early diagnosis, and the medical team must be aware of multiple and extraordinary critical ischemia presentations when bullet trajectory suggests embolism. In a limited resource scenario, clinical evaluation and multidisciplinary team are important to guide prompt, urgent, surgical exploration.

The case report protocol was approved by Institution Reviewer and Ethical Board in human research (CEP/HR) numbered CAAE 37281620.9.0000.5198 on October 6, 2020. The patient consent has been obtained.