This is the first report on a case of perindopril/amlodipine-induced thrombotic microangiopathy (TMA) syndrome. A 48-year-old female was admitted complaining of nettle rash all over the body, bloody urine, and weakness shortly after starting antihypertensive therapy with perindopril/amlodipine. Shortly thereafter, she developed pronounced hemiparesis, somnolence, and sensorimotor aphasia. Laboratory findings were compatible with microangiopathic hemolytic anemia and thrombocytopenia. She was diagnosed with TMA. Cessation of perindopril/amlodipine therapy and treatment with plasma exchange and systemic corticosteroids resulted in full recovery. Very seldom perindopril/amlodipine may cause hematologic abnormalities, probably through an immunological mechanism, but there were no reports of causing TMA so far. In our case, the symptoms began shortly after the start of perindopril/amlodipine use. The clinical course of TMA in the case was compatible with TMA related to an acute, immune-mediated drug reaction. The most important thing is to promptly recognize TMA and its induction by a drug because distinctive treatment and cessation of the suspected drug can prevent severe outcome, as it was avoided in our patient.

Thrombotic microangiopathy (TMA) is a microvascular occlusive disorder characterized by systemic or intrarenal aggregation of platelets, leading to thrombocytopenia and mechanical injury to red blood cells.[1] It is a life-threatening disorder with a mortality rate of up to 90%, if left untreated. TMA is diagnosed based on the presence of a “pentad” of signs and symptoms, including thrombocytopenia, microangiopathic hemolytic anemia, neurological abnormalities, renal failure, and fever.[2] A type of TMA is drug-induced TMA (DITMA) which requires urgent treatment directed at the TMA pathophysiology. DITMA was described after the use of quinine, antiplatelet agents (ticlopidine and clopidogrel), and chemotherapeutic agents.[3] A literature search for antihypertensive drugs as a precipitating factor produced not a single case report. Thus, we report on the first case of TMA related to the use of perindopril/amlodipine drug.

The patient was a 48-year-old female who presented to the emergency department reporting nettle rash all over the body, accompanied by bloody urine and weakness. The symptoms appeared 2 days after the initiation of a combination of antihypertensive drugs – perindopril 5 mg/amlodipine 5 mg, for registered elevated blood pressure. The past medical history was only notable for hypertension, diagnosed a month before, for which she was not receiving any medical therapy till 7 days before the admission to the hospital. The patient has not taken any illegal substances, toxins, or herbal drugs recently. Her family history was unremarkable for blood disorders and heart or renal disease. On initial physical examination, the patient had a body temperature of 36.8°C, a heart rate of 90 beats/min, and a blood pressure of 120/80 mmHg. Physical status examination revealed that the patient had jaundice, icteric sclera, dry mucous membranes, and nettle rash all over her body. Heart, lung, abdominal, and neurological examinations were unremarkable.

Laboratory findings discovered severe hemolytic anemia and thrombocytopenia. Significant findings included a hemoglobin level of 6.9 g/dL, hematocrit of 19.4%, platelet count of 11 × 103/μL, creatinine of 0.79 mg/dL, total bilirubin of 3.22 mg/dL, indirect bilirubin of 2.34 mg/dL, and reticulocytes of 14.61%. On peripheral smear, fragmented red cells – schistocytes (helmet-shaped or triangular-shaped erythrocytes) [Figure 1] and reticulocytes and lack of platelets were noted, consistent with the presence of microangiopathic hemolysis. Direct and indirect antiglobulin test (Coombs test), as well as blood and urine cultures, was negative. Initial coagulation tests including activated partial thromboplastin time, prothrombin time, fibrinogen, and D-dimer were within the normal range. The plasma activity of disintegrin and metalloprotease with thrombospondin Type I repeats-13 (ADAMTS13) was normal, and the anti-ADAMTS13 autoantibody level was <0.5 Bethesda units/mL. The patient was also HIV, hepatitis B, and hepatitis C negative. Abdominal ultrasound was unremarkable. 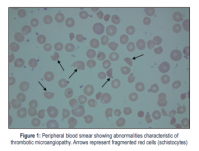 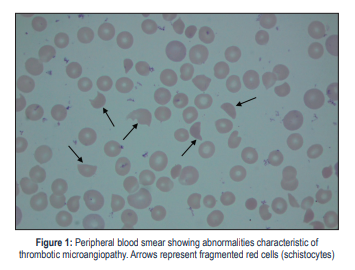 Considering the clinical course and laboratory findings, we diagnosed TMA, for which the Naranjo Adverse Drug Reaction Probability Scale indicated a probable relationship with perindopril/amlodipine (a score of 5 – adverse event appears after the perindopril/amlodipine drug was given +2; adverse reaction starts to improve when the drug was discontinued +1; and we did not find any alternative causes that could have caused the reaction +2).[4] It has been documented that TMA could be caused by different substances such as cocaine, quinine, and a large spectrum of drugs, mostly immunosuppressive and immunomodulatory drugs.[5] The patient was asked about use of any additional substances, and she reported the use of only the prescribed therapy for high blood pressure (perindopril/amlodipine combination). The patient in the emergency department immediately underwent cessation of the suspected drug, plasma exchange (PE), plasmapheresis with infusions of fresh frozen plasma,[6] and simultaneously started with parenteral glucocorticoids (methylprednisolone 1 mg/kg). Despite early initiated therapy, the 4th day, the clinical course was complicated with pronounced hemiparesis, somnolence, sensorimotor aphasia, chest pain, and isolated elevated troponin. We continued PE (total of 9) and glucocorticoids. With the applied therapy, we reported the recovery of consciousness; neurological status; normalization of platelet count and troponin; and reduction in hemolysis. After the stabilization of the general condition and laboratory findings, we discontinued PE and continued the treatment with only oral glucocorticoids, which were discontinued after several weeks. The patient's clinical course is shown in [Figure 2]. During hospital care and afterward, the patient was treated with ramipril and bisoprolol for elevated blood pressure. The performed examinations have not revealed any comorbidity that could lead to the development of TMA, except for the historical data on the first use of perindopril/amlodipine drug combination, after which there has been a deterioration in the health status of the patient. 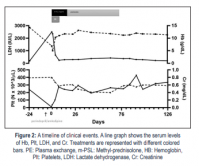 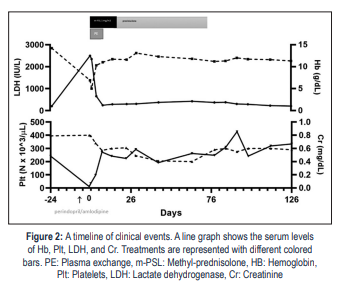 Drugs may cause TMA through two mechanisms: an immune-mediated reaction and/or a dose-related toxicity.[7],[8] DITMA is an acquired condition resulting from exposure to a drug (e.g., medication and other substance) that induces the formation of drug-dependent antibodies or causes direct tissue toxicity that results in the formation of platelet-rich thrombi in small arterioles or capillaries. In immune-mediated DITMA, the drug induces the formation of antibodies that react with multiple cells, including platelets, neutrophils, and endothelial cells, only in the presence of the drug (or drug metabolite).[9],[10] Therefore, these antibodies are described as drug-dependent antibodies. As with other immune-mediated drug reactions, the generation of antibodies requires previous or ongoing exposure to the drug, and the severity of the reaction is independent of the drug dose. Thus, severe reactions may occur rapidly, following extremely small drug exposures. Antibodies in immune-mediated DITMA may be highly specific for the structure of the implicated drug.[11]

Perindopril/amlodipine is a combination of two active ingredients used for the treatment of essential hypertension and/or stable coronary artery disease. So far, there are three reports of thrombocytopenia induced by amlodipine, but no report for TMA.[13],[14],[15] In the study “tolerance and safety of perindopril,” TMA was observed in one of the 632 patients who had long-term treatment with perindopril, although a causal relationship has not been established.[16] Combination drug perindopril/amlodipine may cause very rare hematologic abnormalities, but there are no reports of it causing TMA. In our case, the symptoms began shortly after the start of the perindopril/amlodipine drug, which is known to cause hematologic abnormalities, but TMA in the reported patient was probably caused by the immune-mediated mechanism. A drug-dependent antibody testing is recommended for patients with suspected immune-mediated DITMA. Identification of drug-dependent antibodies associated with a drug not previously reported to cause DITMA is supportive and valuable both for the management of the individual patient as well as making other clinicians aware of the potential association, but it is not required for diagnosis. In our case, we had no abilities to test the patient for drug-dependent antibodies.

This is the first report which links perindopril/amlodipine with the development of TMA. The most important thing is to promptly recognize TMA and its induction by a drug because distinctive treatment and cessation of the suspected drug can prevent severe outcome, as it was avoided in our patient.

The authors certify that they have obtained signed patient consent form. In the form the patient has given her consent for clinical information to be reported in the journal.

VP and LM actively involved in the care and management of the patient, DL involved in data collection, VP involved in manuscript writing, and LZ and DL critically revised the manuscript.