A rare complication of extracorporeal membrane oxygenation and thrombolytic treatment in a patient with massive pulmonary embolism: Intraperitoneal hemorrhage

Massive pulmonary embolism (PE) is one of the important emergencies that needs aggressive treatment for decreasing the risk of death. Extracorporeal membrane oxygenation (ECMO) and fibrinolysis should be considered in patients with failure in oxygenation and perfusion despite invasive mechanical ventilation and vasopressor treatment. We present the case of a 22-year-old male who underwent ECMO, systemic fibrinolysis, and cardiopulmonary resuscitation because of massive PE and subsequently developed intraperitoneal bleeding.

The use of extracorporeal membrane oxygenation (ECMO) in PE is still controversial. Acute PE Guideline of the European Society of Cardiology (2014) relates ECMO as within the experimental evidence category, and it states that ECMO can be an effective procedure in patients with hemodynamic instability despite aggressive treatment.[2] ECMO may be considered in patients with refractory circulatory collapse or cardiac arrest in combination with surgical embolectomy or catheter-directed treatment according to the current PE Guideline of the European Society of Cardiology in 2019 (Class IIb, Level C).[1] In patients undergoing ECMO and systemic fibrinolysis, a complication such as intraperitoneal bleeding is rarely reported.[3]

A 22-year-old male presented to the emergency department (ED) with shortness of breath and chest pain. His blood pressure was 142/90 mmHg, respiratory rate was 32 breaths/min, heart rate was 163 beats/min, and oxygen saturation (SpO2) was 77% on room air and 93% with a nonrebreather mask on ED admission. The patient had been immobilized for 3-week duration due to surgery for trimalleolar fracture 2 months ago. He received light-molecular-weight heparin during the hospital stay. Electrocardiogram revealed sinus tachycardia without ST-T wave abnormality or bundle branch block. Bedside point-of-care ultrasound examination revealed right ventricular dilatation, D-shaped left ventricle, and a deep-venous thrombosis of the right popliteal vein. Although PE was considered at this stage, empirical fibrinolytic therapy was not given because the patient was not yet hypotensive. Noninvasive mechanical ventilation (NIMV) was commenced to correct hypoxemia. Shortly after the application of NIMV, the patient developed hypotension and subsequent confusion, therefore orotracheal intubation was performed. A few minutes after the intubation, the patient developed cardiopulmonary arrest with the initial rhythm of pulseless electrical activity. There was approximately 30 min between the ultrasound examination and cardiac arrest. After three rounds of cardiopulmonary resuscitation (CPR), a bolus of 50-mg alteplase was given due to the high clinical suspicion of PE. After the alteplase bolus, return of spontaneous circulation (ROSC) was achieved within minutes. He suffered three separate cardiac arrest periods within the next 30 min after the initial ROSC and a second half-dose of alteplase (50 mg) was administered during CPR. ROSC was achieved eventually, and the patient underwent pulmonary computed tomography (CT) angiography under high-dose norepinephrine infusion. The pulmonary CT angiography revealed massive thrombosis in both pulmonary arteries and enlarged right ventricle [Figure 1]. Remarkable laboratory results of the patient on admission were D-dimer 10.1 µg/mL (range <0.5), high-sensitivity troponin I 1.328 ng/L (range <5.6), creatine kinase-MB 7.1 ng/mL (range <6.3), lactate 5.3 mmol/L, and pH 7.33. Laboratory results of the patient are summarized in [Table 1].

Figure 1. Pulmonary computed tomography angiography showing thrombus [Figure 1a, arrows] on both the main branches of the pulmonary artery and dilation of the right ventricle relative to the left ventricle [Figure 2b]
× 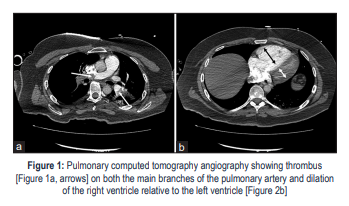 Table 1. Laboratory results of the patient

He was still hypoxic and hypotensive despite high doses of norepinephrine/dopamine infusion and 100% FiO2 on mechanical ventilation, therefore cardiovascular surgery was consulted to assess the patient for ECMO. Veno-arterial ECMO was performed successfully on the 4th h of presentation. A total of 16 units of blood products (9 units of red blood cell [RBC], 5 units of fresh frozen plasma, and 2 units of platelet suspensions) were given to the patient under the ECMO, but hypotension persisted and hemoglobin level progressively dropped from 14 to 8.7 g/dL. Thoracoabdominal CT was performed due to the suspicion of hemorrhagic shock. CT detected massive fluid in the abdomen [Figure 2], and then peritoneal fluid aspiration showed intra-abdominal hemorrhage. The patient was admitted to the intensive care unit (ICU) on high-dose vasopressor and ECMO support, but 2 h after admission to the ICU, the patient died. 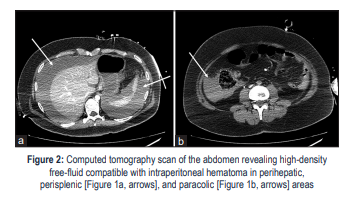 Treatment of PE in patients with hemodynamic instability is one of the most important challenges to the emergency physician. The high mortality rate is still a problem despite advances in diagnosis and treatment. The management of PE is tailored with risk stratification, which is based on hemodynamic parameters. Patients with sustained hemodynamic instability, cardiac arrest, or shock should be treated with fibrinolytics.[1] The potential indications of ECMO in PE are cardiac arrest, severe cardiac compromise, contraindication to systemic thrombolysis, failed systemic thrombolysis, failed catheter-based clot extraction, severe hypoxemia, and hemodynamic instability for catheter-based clot extraction/thrombolysis.[4]

Recently, there were many observational studies published regarding ECMO treatment in patients with high-risk PE. In a multicentric study of 52 PE patients who underwent ECMO, 17 patients received systemic fibrinolytic before ECMO. In these patients, 30-day mortality was reported as 76.5% (13/17). Two of these deaths occurred due to major bleeding.[5]

Corsi et al. examined 17 massive PE patients undergoing ECMO. Two of these patients received ECMO for refractory cardiogenic shock and 15 for cardiac arrest. Eight patients received fibrinolytic therapy before ECMO. The 90-day mortality was reported as 47%. Moderate-to-severe bleeding occurred in 88% of the patients. In patients with bleeding, the median RBC transfusion count was reported as 4 units and the median fresh frozen plasma transfusion count was reported as 5 units. However, bleeding sites were not specified in the study.[6]

A case report of a 34-year-old female patient who presented to the ED with shortness of breath and developed cardiac arrest in a short period is very similar to our case. This patient was given 10-mg alteplase by intraosseous route after CPR and then veno-arterial ECMO was applied. In the follow-up of the patient, intraperitoneal and groin hemorrhage was detected. In the literature, we could not find another case report with intraperitoneal bleeding after systemic fibrinolytic and ECMO treatment and prolonged CPR.[3]

Two cases with a ST-segment elevated myocardial infarction, who underwent percutaneous coronary intervention and subsequently developed cardiac arrest and then underwent ECMO, were reported. In these patients, intraperitoneal hematoma developed in the following hours, and liver laceration was detected in their laparotomies. In these patients, probably, the cause of liver laceration was secondary to the traumatic CPR.[8]

Although it is not possible to find out the exact cause of mortality in our patient, we think that progressive hemorrhagic shock and concomitant hemodynamic instability associated with acute right ventricular strain was the contributor to the mortality. There was no major bleeding around the ECMO catheters, although the imaging was suboptimal due to a decrease in contrast enhancement below the renal arteries in the aorta, therefore we suspected solid organ damage as the cause of intraperitoneal hemorrhage. We presume that the cause of intraperitoneal bleeding may be one or more of the following factors: therapeutic anticoagulation administered during ECMO, fibrinolytic treatment, or prolonged CPR.

Intra-abdominal hemorrhage should be kept in mind, in progressively deteriorated PE patients treated with systemic fibrinolysis, prolonged CPR, and ECMO.

The authors certify that they have obtained all appropriate patient consent forms. In the form the patient (s) has/have given his/her/their consent for his/her/their images and other clinical information to be reported in the journal. The patients understand that their names and initial s will not be published and due efforts will be made to conceal their identity, but anonymity cannot be guaranteed.

SO, EA, and AAK designed, performed literature search, and wrote the manuscript. All authors provided feedback and reviewed the entire article.