OBJECTIVES: In this study, we aimed to investigate the accuracy of recognition of stroke in the Emergency Room (ROSIER) Scale in the diagnosis of patients with acute ischemic stroke (AIS) transferred to the emergency department (ED).

METHODS: The present study was a multicenter study. Records from patients suspected of stroke, who referred to the ED were reviewed. Demographic, clinical, and diagnostic data were extracted and then entered in checklists. ROSIER Scale was used to evaluate the possible diagnosis in this study. The definitive diagnosis of a stroke was made based on neurologist's assessment and clinical and neuroimaging findings, mainly brain magnetic resonance imaging (MRI). Receiver operating characteristic (ROC) curve analysis was conducted for assessing the accuracy of ROSIER in discrimination of stroke.

CONCLUSION: Based on the findings, although the best cutoff point was the same as the original (derivation) study, its sensitivity (85.4% vs. 92%) and specificity (65.8% vs. 86%) were considerably lower.

Acute ischemic stroke (AIS), as a medical emergency, is not only one of the leading causes of death but also leads to loss of useful years of life. Hence, it imposes a significant additional burden on the individual and society in short as well as the long term.[1],[2] Effective treatments for AIS, both at the pharmacological and radiologic level, are available today, but the crucial issue is the timely use of these therapies in the golden time.[3],[4] Since patients with a possible diagnosis of AIS are first brought to the emergency department (ED), emergency physicians are the first line to make a prompt and accurate diagnosis.[5] Unfortunately, only 1%–8% of AIS patients benefit from the treatment they receive due to delayed referral. According to reported statistics, incorrect diagnosis and also misdiagnosis of AIS was made in 2–26 and 30%–43% of the cases, respectively.[6] Due to time-dependent management, various checklists and criteria have been developed for rapid, accurate, and early diagnosis in the pre-hospital and in-hospital settings. In 2005, Nor et al. introduced a hospital scale in Newcastle, called recognition of stroke in the emergency room (ROSIER); in which, for scores >0, sensitivity and specificity were reported as 92% and 86%, and positive and negative predictive values were 88% and 91%, respectively.[7] This scale has been further evaluated in other countries such as UK, Germany, China, and Hong Kong, with sensitivity and specificity ranges of 83%–97% and 18%–93%, respectively.[8],[9],[10],[11],[12],[13],[14] In this study, we aimed to evaluate the validity of ROSIER scale for the diagnosis of AIS in the Iranian population based on the findings of brain magnetic resonance imaging (MRI) as the gold standard for the final diagnosis.

This was a retrospective and multicenter study (Test Validity Assessment), performed throughout 2019 on patients referring to the ED of Sina and Shohaday-e-Tajrish Hospitals, Tehran, Iran. Given the retrospective nature of this study, no change was made to the diagnostic and therapeutic process of the patients, and therefore, it did not impose an additional cost on the patients or the health-care system. Patients' identity was confidential, and no information was reported individually. The study complied with the Ministry of Health's ethical guidelines and was performed after obtaining necessary approval from the Ethics Committee of Tehran University of Medical Sciences (IR.TUMS.MEDICINE.REC.1397.24).

Adult patients (over 18 years old) suspected of having AIS, who had been transferred to the ED, and had undergone a brain MRI were eligible. We excluded patients who had a previous history of trauma or known neurological disease or those who had undergone prior neurosurgery. Sampling was conducted using census method and continued until the sample size was reached. According to the study conducted by Nor et al.,[7] by assuming a specificity of 83%, an error of 7% in estimation and accuracy of 95%, as well as an AIS prevalence of 46% in the Iranian population, the minimum sample size for estimating the sensitivity and specificity in this study was calculated as 207 people.

Patients' files were reviewed, and information, including basic characteristics, demographics, patients' signs and symptoms, and vital signs, were extracted and entered into the pre-prepared checklist. In addition, the ROSIER scale was used to evaluate the possible diagnosis in this study. [Table 1] shows the details of the ROSIER scale calculation. The scale includes two items with a negative score and five items with a positive score. The definitive diagnosis of AIS was made based on neurologist's assessment and according to the symptoms and brain MRI findings.

Table 1. The details of recognition of stroke in the emergency room scale calculation 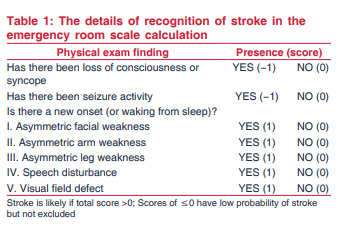 Basic features of the data and variables in the study are presented using descriptive statistics, such as the frequency with percentage, mean with standard deviation (SD), and median with interquartile range (IQR), as appropriate. The normality assumption was checked with graphical approaches and the Shapiro–Wilk test. We used the Chi-square test, independent t-test, and Mann–Whitney U-test, as appropriate. The logistic regression model was used to investigate ROSIER criteria for predicting AIS. Simple (univariable) logistic regression was initially performed on all ROSIER criteria and then the variables (ROSIER criteria) that had a P value lower than 0.2 were put into the multivariable logistic regression model. Value of P < 0.05 was considered as statistically significant. Receiver operating characteristic (ROC) curve analysis was conducted for the assessment of ROSIER accuracy in discrimination of AIS. We used the area under the ROC curve (AUC) for comparing ROSIER between two diagnostic groups (with and without AIS). We used the Youden index to choose the best cutoffs to diagnose AIS. We calculated sensitivity and specificity with 95% confidence interval (CI). Furthermore, positive and negative predictive values of cutoff points were estimated based on final clinical diagnoses. SPSS Statistics for Windows, Version 24.0. Armonk, NY: IBM Corp) and Stata v. 14 (StataCorp. 2015. Stata Statistical Software: Release 14. College Station, TX: StataCorp LP) were used for the statistical analyses.

In total, data of 356 suspected AIS patients were analyzed. Of all, 186 patients (52.2%) were male and the mean age was 65.2 (SD = 14.0) years ranging from 26 to 95 years. Demographic characteristics and history of disease and risk factors in patients with and without AIS diagnosis are reported in [Table 2]. One hundred and fifty-one patients (42.4%) had AIS based on the final diagnosis. The prevalence of AIS in male patients was significantly higher than female patients (48.4% vs. 35.9%;P= 0.017). Moreover, AIS in smokers was significantly higher than non-smoker patients.

Table 2. Demographic characteristics and history of disease and risk factors in patients with and without acute ischemic stroke diagnosis 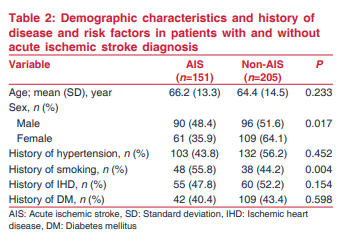 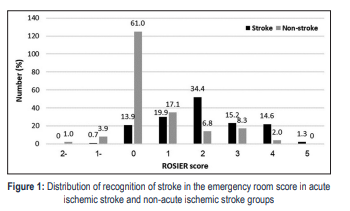 Table 4. Best cutoff point of Recognition of stroke in the emergency room and accuracy indices for stroke diagnosis

In this study, we found that the ROSIER scale has the highest sensitivity (99.3%) in its proposed score (score >0), but also has a very poor specificity (4.9%). However, at its best-calculated cutoff point (score ≥1), it has a sensitivity of 85.4% and the specificity of 65.8% for the diagnosis of AIS in the ED. As it was mentioned, the ROSIER scale was introduced by Nor et al. for the first time in a hospital in the UK in 2005. In its derivation-validation study, it was reported that the threshold of more than zero had a sensitivity of 92%, specificity of 86%, positive predictive value of 88%, and negative predictive value of 91%.[7] Here, in our study, although we confirmed its high sensitivity at the cut-off point of zero, we also found that it has a very poor specificity compared to the Nor et al. study (86% vs. 5%) at this threshold.

The older the population of the world, the more people are at risk for AIS. In addition, as a result of improvement in emergency medical service training, particularly about possible AIS symptoms, we expect higher referral of AIS suspected patients to designated hospitals at the appropriate time. Nowadays, it has become vitally important to rapidly differentiate stroke from stroke mimics to initiate thrombolytic therapy correctly. Therefore, correct and rapid diagnostic evaluation of suspected AIS patients is the first step in AIS management, and clinical rules are used in this regard. As a brief critique, it seems that amongst clinical stroke diagnostic tools, ROSIER is a simple one with appropriate sensitivity. It does not assess the patient's age and bedside blood sugar level and also considers a negative score for seizure, while seizure may be a symptom of stroke, and stroke may occur in younger people as well. On the other hand, items such as hemianopia and lower extremity paresis, which are assessed in ROSIER, are not included in other tests such as LAPSS, MASS, CPSS, or FAST.[7],[16[,[17],[18],[19],[20]

The present study did not differentiate between ischemic stroke and cerebral hemorrhage. Even though the present multicenter study was performed in more than one center, the prevalence of ischemic stroke in this study may not be generalized as the prevalence of stroke in Iran due to prevalence variation based on geography and race. In the present retrospective study, we were unable to extract some data such as a history of illness and clinical symptoms accurately and completely during the file review. Moreover, patients included in this study had various underlying diseases that could influence the evaluation of a diagnostic tool. ROSIER is not able to differentiate 100% of strokes from stroke mimics (it does not have a sensitivity of 100%) and that is why negative ROSIER is defined as a low probability of stroke and unable to rule out the stroke. A history of stroke complicates the evaluation of patients with ROSIER criteria; hence, it results in higher ROSIER scores.

Based on the findings, although the best cut-off point was the same as the original derivation study, its sensitivity (85.4% vs. 92%) and specificity (65.8% vs. 86%) were considerably lower. The main influencing factor may be the different gold standard considered in the current study (brain MRI) in comparison with the original derivation study (neurologist decision).

The conception and design of the work by AB, SK and FR; Data acquisition by SK, SM, and MS; Analysis and interpretation of data by MZ, FR and AB; Drafting the work by MS, MZ, and SK; Revising it critically for important intellectual content by AB, SM, and FR; All the authors approved the final version to be published; And agree to be accountable for all aspects of the work in ensuring that questions related to the accuracy or integrity of any part of the work.