Cardiac compression of a hepatic cyst in polycystic liver disease: A rare cause of hemodynamic instability

Polycystic liver disease (PLD) develops due to embryonic ductal plate malformation of intrahepatic bile ducts. Cysts in the liver can range from a simple compression effect to severe liver failure. The most common complication is rupture and inflammation of cyst. It can sometimes progress to the extent of pushing the heart to the left or compressing the inferior vena cava, thereby reducing the venous return. Here, we present a case with giant liver cyst‐related symptoms that caused external compression of the right ventricle and atrium. A 71‐year‐old female patient was admitted to our emergency department with increasing dyspnea, chest pain, and abdominal distension. Her vital signs were as follows: temperature 38°C, pulse 140 beats/min, and blood pressure 70/40 mmHg. Her abdomen was distended, and there was minimal epigastric tenderness. Hepatomegaly was also present. Posteroanterior chest radiography revealed opacity that erased the right diaphragm contour at the right inferior hemithorax. In thoracoabdominal computed tomography, the heart was deviated toward the left due to the compression of a large cystic formation located in the hepatic right lobe, pushing the diaphragm to the superior. Piperacillin/tazobactam 3 g × 4.5 g treatment was initiated, and external drainage was performed by interventional radiology. Following this procedure, significant improvement was observed in the patient’s condition. Her symptoms significantly improved, and the drainage catheter was removed on the seventh day. Hepatic cysts in patients with PLD may compress adjacent structures, and cardiac compression can be life‐threatening if hemodynamic instability occurs.

In polycystic liver disease (PLD) cysts derive from biliary epithelial cells in the liver. PLD is a hereditary condition with two types: autosomal‐dominant PLD (ADPLD) and autosomal‐dominant polycystic kidney disease (ADPKD). In the ADPLD, cysts occur only in the liver, and in the ADPKD, cysts are observed in both the liver and kidneys. The incidence of the liver cysts seen in ADPKD is 83% with a significant increase with age.[1] PKD1 and PKD2 genes are to blame for ADPKD, and those responsible for ADPLD are PRKCSH and SEC63.[2] The most useful diagnostic methods are ultrasonography (US) and computed tomography (CT). Liver function tests can also be helpful, although they are not specific.

Compression to the neighboring intraperitoneal and intrathoracic organs increase due to the expansion of the multiple liver cysts and results with abdominal distension, gastroesophageal reflux, dyspnea, back pain, low back pain, and severe malnutrition.[3] Major complications of liver cysts are cyst torsion, cyst rupture, intracystic hemorrhage, and cyst infection.

Cyst infections are difficult to treat since they form closed cystic spaces. Conservative treatment is recommended in most PLD cases. Invasive methods are indicated in patients with advanced PLD and liver failure. Pharmacological treatment with somatostatin analogs has been shown to reduce symptoms and liver volume in PLD.

To summarize, several life‐threatening complications have been described due to cyst infections that reduce the patient’s quality of life. Liver cysts can sometimes progress to a severe form, in which they deviate the heart to the left or compress the vena cava inferior, resulting in reduced venous return. This study was aimed to report a rare case of PLD presenting with a giant liver cyst that caused a mediastinal shift and hemodynamic instability.

A 71‐year‐old female patient presented to our emergency department with complaints of dyspnea, chest pain, abdominal distension, and restlessness that had been ongoing for the past two months but worsened within the last 24 h. The patient had no concomitant disease. Her medical records showed that her father and sister were dialysis patients and our patient was in the follow‐up of the internal medicine clinic due to ADPKD. On physical examination, her general condition was moderate, she was conscious, her pupils were isochoric, and her Glasgow coma scale score was 15. The vital signs on admission to the emergency room were as follows: temperature 38°C, irregular pulse 140 beats/ min, blood pressure 70/40 mmHg (measured from the right arm) respiratory rate 22/min, and saturation 88%. Respiratory sounds were significantly decreased in both lungs, and rales were present. The cardiac examination revealed tachycardia. The abdomen was distended, the bowel sounds were normoactive, and there was minimal epigastric tenderness. Hepatomegaly was also present. Furthermore, non‐pitting, pretibial edema was observed. According to the laboratory tests, the arterial blood gas values were pH: 7.34, PO2: 58 mmHg, PCO2: 26 mmHg, lactate 2.2 mmol/L, HCO3: 20 mEq/L, and the hemogram and biochemical values were ALT: 21 U/L, AST: 30 U/L, albumin: 1.8 mg/Dl, amylase: 52 U/L, total bilirubin: 0.7 mg/dL, direct bilirubin: 0.5 mg/dL, white blood cell: 16.2/mm3, neutrophil: 12.6/mm3, hemoglobin: 8.89 g/dL, hematocrit: 26.1%. A bladder catheter was inserted, and 100 ml urine output was observed. Noradrenaline infusion was initiated for hypotension. Posteroanterior chest radiography was performed using a portable X‐ray device [Figure 1]. Due to the unclear findings obtained from the chest radiographs, thoracic and abdominal CT were performed [Figures 2‐4]. 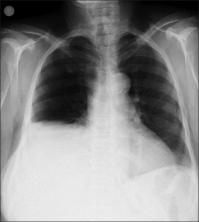 Figure 1. The chest X-ray of the patient. The diaphragm is elevated on the right. At the inferior of right hemithorax, opacity in the right diaphragm is observed. The opacity has slightly shifted the heart to the left
× 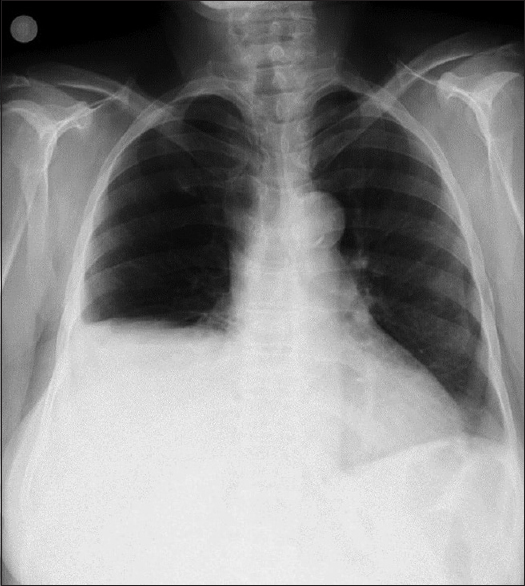 Figure 2. Thoracoabdominal computed tomography without intravenous contrast media. The coronal reformatted image (a) reveals a large cystic formation (asterisk) located in the hepatic right lobe, pushing the diaphragm to the superior. Due to the compression of the cyst, the heart has deviated to the left (small arrows). Besides, there are prominent hypointense lesions of the cysts in both kidneys (large arrows). In the transverse computed tomography section (b), the large cyst (asterisk) located in the hepatic right lobe is observed to compress the heart toward the left (arrows)
×

Figure 3. Contrast-enhanced abdominal MRI showing no contrast enhancement of the liver cyst in precontrast (a) and post-contrast (b) fat-suppressed T1-weighted images (asterisk). There are also other scattered cysts of smaller size in the liver
× 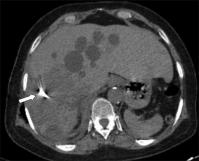 Figure 4. The follow-up computed tomography image obtained after percutaneous drainage of the cyst, showing the dense structure of the shunt catheter within the hypodense, heterogenous area of the cyst cavity in the transverse section (arrow).
× 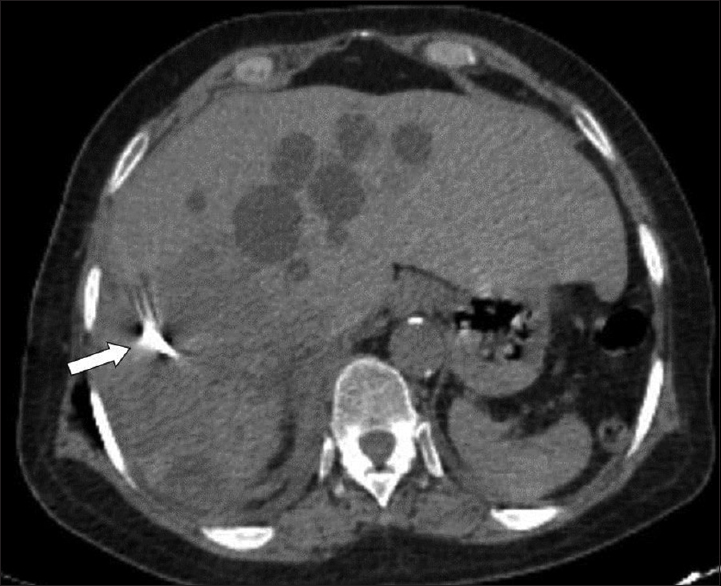 The mediastinal shift to the left due to a liver cyst reaching approximately 20 cm in size was diagnosed in abdominal CT. This was considered to be the cause of her hypotension and tachycardia. As antibiotherapy, piperacillin/tazobactam 3 g × 4.5 g treatment was initiated. External drainage was performed in the interventional radiology room by an experienced radiologist under the local anesthesia with the guidance of US by using an 8 French catheter with Seldinger technique. The patient’s symptoms considerably improved after the drainage and the catheter was withdrawn on the seventh day. The patient was discharged in the following day with full recovery.

Simple cysts of the liver are identified as cystic formations containing clear fluid content without any intrahepatic bile duct connections. The cysts in both PLD and ADPKD, which cause these entities in the liver, are considered to be due to the von Meyenburg complexes characterized by the malformation of the embryonic ductal plate.[4]

While the prevalence of hepatic cysts is 2%–3% in previous studies, it is 18% in recent studies.[5] Differences in diagnostic radiology and the increased use of imaging modalities are the possible reasons for this difference in prevalence. Ultrasound, CT, and magnetic resonance imaging (MRI) are all diagnostic, but ultrasound is the most preferred method due to it is faster and cheaper. In our case, multiple liver and kidney cysts were seen on CT and MRI.

Most of these simple cysts in the liver are usually incidentally detected during imaging due to their asymptomatic behavior. However, larger cysts manifest perspicuous symptoms such as abdominal pain, distension, fullness, early satiety, nausea, and vomiting. Rupture, infection, obstructive jaundice, cyst bleeding, portal vein occlusion with the formation of splenic varices, and thrombosis of the inferior vena cava are the most common complications of hepatic cysts.[6]

Cardiac complications are scarce, with only a few cases having been reported in the literature.[7‐9] In a previous paper, one case was presented with early atrial contractions related simple liver cysts.[7] Two cases of refractory hypotension, one associated with PLD and the other with PKD, were also reported.

Another previous study reported a patient admitted to the hospital with septic shock after nephrectomy. The left ventricular ejection fraction of the patient was 30%, and he had hypotension and infection. He was found to have a hepatic cyst that pushed the right atrium and ventricle.[8]

In the literature, two PKD cases with right‐sided heart failure due to liver cysts compressing the right atrium have been described.[9] Our patient had both right atrial and right ventricular compression, which resulted in reduced venous return. This also explained her clinical symptoms, such as exercise intolerance, fatigue, tachycardia, and hypotension.

Asymptomatic simple liver cysts are usually treated conservatively; however, in cases that become symptomatic, surgical intervention may be required. Surgical procedures include hepatic resection, laparoscopic or open deroofing. Alternatively, US guided minimal invasive methods such as radiofrequency ablation, sclerotherapy, and simple drainage are also used for diagnosis. Despite surgical intervention, 11.3% of non‐parasitic cysts have recurrence of hepatic cysts. In a recent study, the rate of recurrence was reported to be low; 6.1% and 11.5% for cysts removed by laparoscopic and open surgery, respectively.[10] In the cases for ADPLD, the suggested treatment methods for the symptomatic liver cysts are open deroofing, which is also called as fenestration, and percutaneous sclerotherapy. Simple drainage usually results with recurrence.[11] In our case, the catheterization was performed with no sclerotherapy and the drainage catheter was stayed for a week in the cyst cavity to prevent early recurrence.

Giant liver cysts associated with PLD should be considered in the differential diagnosis of external right ventricular compression, and emergency physicians should keep in mind that external drainage of these cysts can contribute to the patient survey.

Consent to participate
Authors declared that they have the consent of the patient for the publication of the case and images.

AA and SÖ reviewed the literature and wrote up the paper. Critical revisions made by; MS, MÖE and İİ. All authors have read and approved the content of the final manuscript.