A 4-year-old boy was admitted to emergency department of our institution with left testicular swelling and pain started 48 h ago. Physical examination revealed left sided erythema and tenderness in scrotum which was refractory to testicular elevation. The parents did not describe undescended testis, trauma or recent mumps history that may explain acute swelling of left scrotum. Immediately after the physical examination, a scrotal Doppler ultrasonography was performed using a high frequency linear transducer. Ultrasonographic evaluation showed heterogeneously enlarged left testis and edema in the left scrotum. Blood supply was decreased in left testis in comparison to the right, however, arterial waveforms were still preserved in the left epididymis. In addition to Doppler and gray scale ultrasonography features, a smooth contoured demarcation line in the left testis was also observed which simulated mass lesion in the left testis. Based on the ultrasonography findings a concurrent testicular neoplasia could not be ruled out completely and the patient was referred to contrast-enhanced magnetic resonance imaging (MRI) promptly after ultrasound examination. MRI revealed left testicular enlargement, scrotal edema, and heterogeneous hypointense areas in T2-weighted images, but there was no solid or cystic mass lesion within the left testis. The affected testis was observed to be prominently hypointense on T1-weighted images compared to right. At post-contrast and subtraction MRI sequences avid contrast enhancement was detected in left paratesticular tissue however, left testis was completely avascular at post-contrast MRI sequences (Fig. 1). Based on the MRI findings, the diagnosis of testicular torsion was made confidently. Emergency surgical exploration confirmed intravaginal testicular torsion but, unfortunately detorsion operation could not have been performed and left sided orchiectomy was required because left testis was observed to be totally necrotic during surgical intervention (Fig. 2). 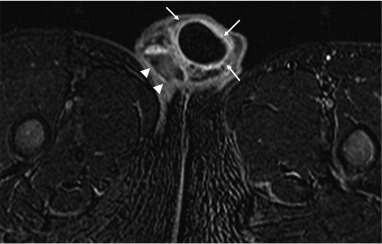 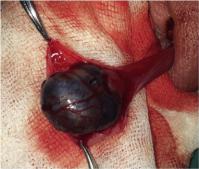 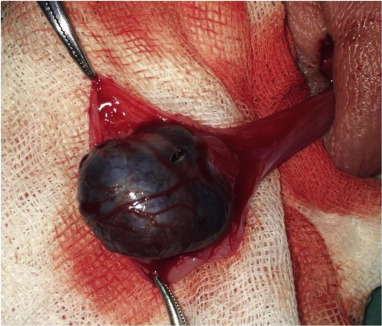 Intravaginal torsion accounts for most cases of testicular torsion. Most cases are spontaneous but, rarely intravaginal testicular torsion may result from testicular trauma.(1) Since irreversible damage may occur within 4–6 h of symptom onset, early diagnosis and urgent surgical intervention are critical.(2) In the early stage of torsion, the echogenicity and size of the affected testis may be normal. Later findings include testicular enlargement and increased parenchymal echogenicity. If left untreated, the torsion will eventually progress into infarction which is seen as decreased or absent blood flow in color Doppler ultrasonography.(1) The latter is sometimes diagnostic challenge in ultrasonography since, demarcation line of the infarcted testis tissue may simulate tumor particularly in late testicular torsion.(3) In the current case, as reported in the literature,(4) a testicular tumor was accurately ruled out via emergency contrast-enhanced MRI.

In conclusion, late testicular torsion may mimic testicular mass lesion in ultrasonography which may cause a diagnostic challenge in Emergency Medicine. Contrast-enhanced MRI is helpful in the diagnosis as well as in the differential diagnosis in such complex cases.